3 New Sects (Sub-Factions) of the Daughters of Khaine 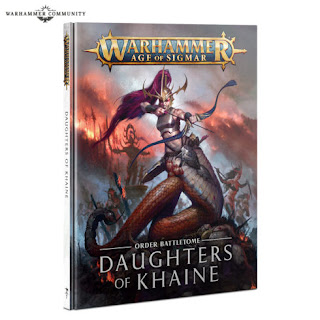 A preview for the new Battletome Daughters of Khaine and new Sub-Factions that will be in there. Definitely some great variation in the factions, so lets see what it has in store for us. It comes to preorders this weekend.

3 New Sects (Sub-Factions) of the Daughters of Khaine

Hagg Nar
Morathi’s mightiest stronghold even before her ascension to godhood, Hagg Nar – known also as the First Temple – is now a seat of power to rival any found in the Mortal Realms. The Daughters of Hagg Nar are the fiercest of their order, their bloodlust palpable in the heat of battle. If you’re looking for a reliable and deadly force of warriors, or you’re new to the faction, Hagg Nar is a perfect choice. 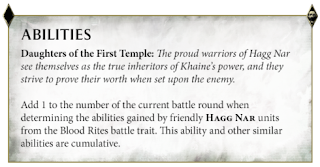 This ability allows you to re-roll run and charge rolls of 1 for your Hagg Nar units from the outset of the battle. It also means that you’ll be able to re-roll hit rolls of 1 in melee from the second battle round onwards. Even if your opponent wins the dreaded double-turn and gets the jump on you, your Daughters of Khaine will be more than ready to meet (read as ‘murder’) them.

If slaughter is an art form, then the warriors of Draichi Ganeth are among its finest practitioners. They strive to master the deadliest martial techniques, and every killing blow they deliver is an act of worship to their murderous god. If all-out aggression is your favoured tactic, you can’t go wrong with these elite killers. 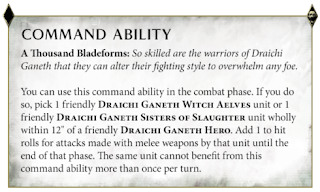 With most Daughters of Khaine units hitting on a 3+ in melee (before modifiers), the target of this command ability will likely be hitting on a 2+, re-rolling 1s from the third battle round onwards thanks to the effects of Blood Rites.

The Melusai of Zainthar Kai are among the most formidable of their kind, revered as holy warriors by many of the Khainite cults, for three drops of Khaine’s vital essence lives on in each of them. This spark of divine power grants them abilities far beyond those of other sects. Zainthar Kai is the natural choice if you favour the snake-tailed Melusai as the core of your army.

Hurl your general into the thick of the fighting and watch your enemies fall to her furious presence, not to mention her blade(s).

There are three more (incredibly violent) sects to choose from in the battletome, each with its own set of powerful sub-faction abilities to give them an edge on the battlefield. While you wait for the battletome to be released on pre-order this weekend