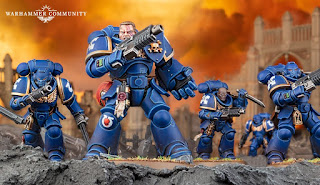 Space Marines are getting some big updates when it comes to Kill Team to get them caught up after their codex release. So expect a lot of what we find in their codex to reach Kill Team. Take a look at what some of these are in this preview.

With them, they’re bringing a range of powerful weaponry and upgraded datasheets to choose from. Many old favourites have also been brought up to the standard of their Codex: Space Marines brothers, so there’s almost nothing among the Astartes that hasn’t changed in some way.

Veteran commanders of Space Marine kill teams have been waiting with bated breath for the chance to field some of the Indomitus boxed set’s most celebrated heroes. After cleaning the last few bits of Necron off their master-crafted power swords, the Bladeguard Veterans are more than ready to join the fierce close-quarters battlefields they excel in.

It’s safe to say they’ve lost none of their breathtaking close combat prowess in the trip over, combining rock-solid durability with 3 deadly Attacks to provide a daunting proposition to any would-be opponent. You may remember from last year’s look at weapon changes in Warhammer 40,000 that power swords got a substantial boost in strength, and now they’ll hit just as hard in Kill Team too.

It’s not just the Bladeguard Veterans that are arriving from the Indomitus contingent either. We’ve already taken a look at the hitting power of Assault Intercessors, who complement the Heavy Intercessors’ durability perfectly. Now, to lead them into the fray, you’ll have expanded wargear options for both Primaris Captains and Lieutenants, which match their codex datasheets.

There’s even more to look forward to, like the Kill Team debut of the dreaded Judiciar, but we can’t tell you everything that’s in Pariah Nexus. You’ll just have to check it out for yourself.

Okay, one more thing. No longer do firstborn Space Marines have a single solitary Wound keeping them on their feet, as every true Space Marine* in the roster now has the 2 Wounds we know they always deserved. This will come as an extra-special treat to Deathwatch players, whose iconic Veteran squads are now twice as tough across the board for no extra cost.