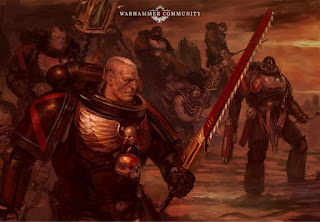 The Blood Angels are among the most revered Chapters of the Adeptus Astartes, renowned for their heroic defence of the Emperor’s Palace at the height of the Horus Heresy and fighting at the forefront of the Imperium’s wars for more than 10 millennia. Yet bound within the blood of each son of Sanguinius is a gene-curse that can rise up to lay low even their most noble warriors. Today, we’re taking a look at the causes and effects of the Black Rage and the Red Thirst – the two afflictions known collectively as ‘the Flaw’ – that have haunted the Blood Angels for millennia. 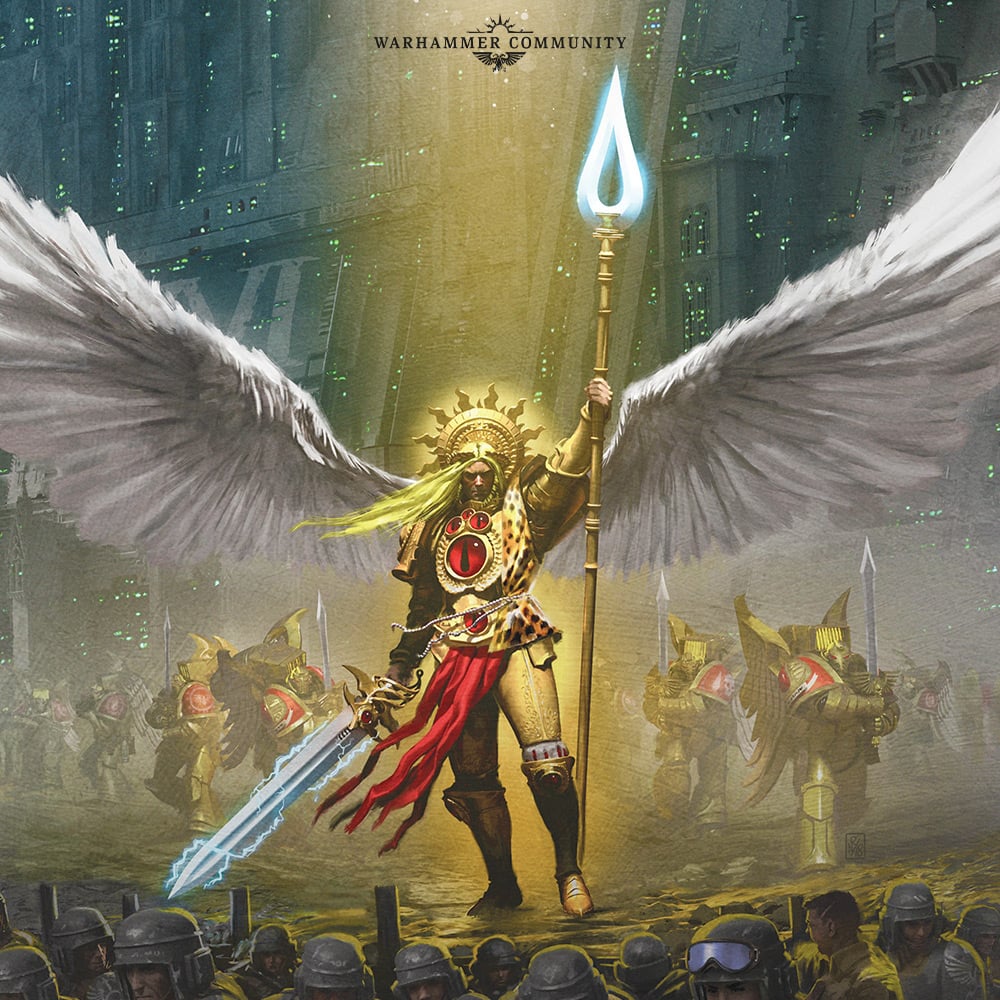 The Blood Angels may be renowned for their noble visage and for fighting as the very embodiment of the Angels of Death, yet the more blood they spill, the more they have an overwhelming desire to drink the vital fluids of those they slay. By channelling their bloodlust, the Blood Angels can unleash a ferocity that has led them to victories beyond count. Sometimes they lose control of the Red Thirst, however, and in the aftermath of such battles, it is not uncommon to find the bodies of foes – and more disturbing still, the occasional Imperial citizen – drained of blood…

The first known occurrence of the Red Thirst took place during the time of Sanguinius, on the Daemon-haunted planet of Signus Prime. Even though Sanguinius eventually defeated the Exalted Bloodthirster Ka’Bandha, the creature’s terrible presence roused an unwholesome fury within his sons, much to the Primarch’s concern.* 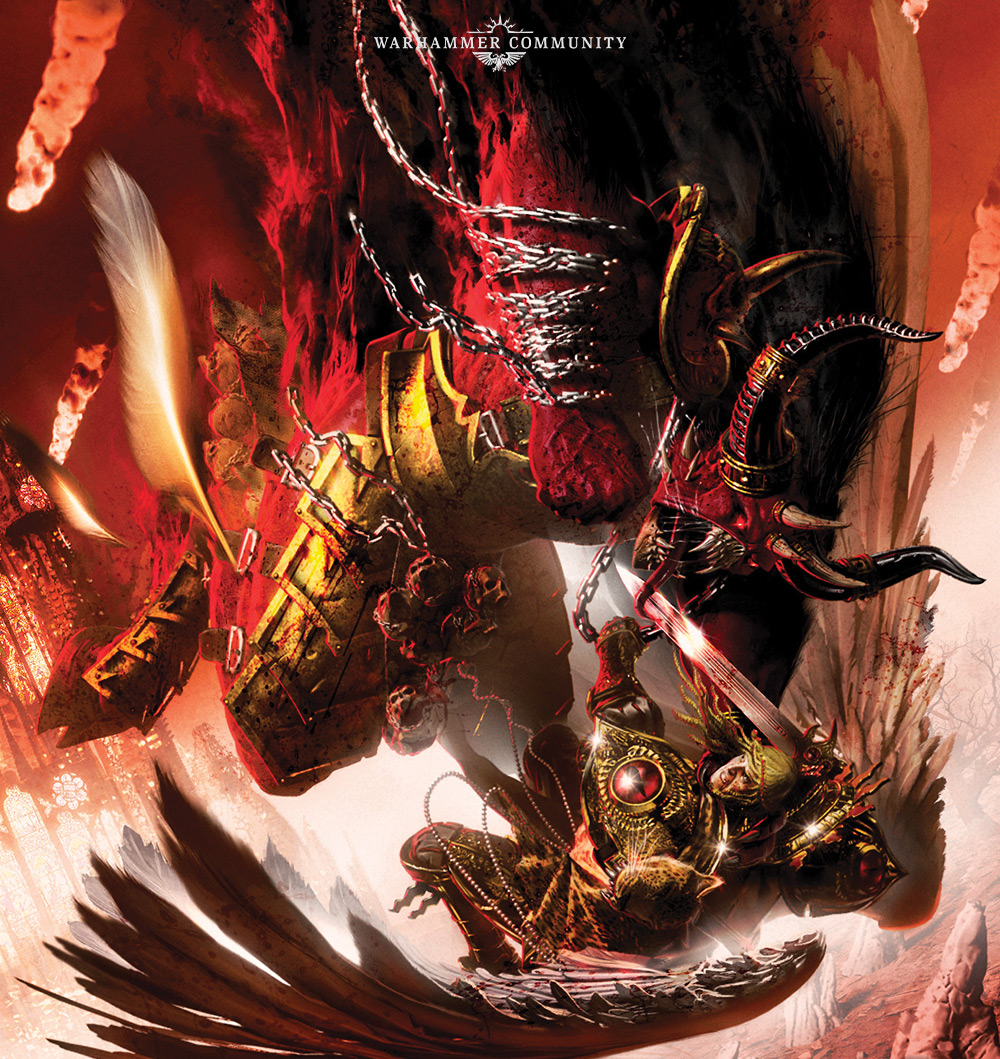 The effects of the Red Thirst subside over time, though some of Sanguinius’ sons seem to be more susceptible to its call than others. The Flesh Tearers, in particular, are widely feared even by their allies for their seemingly insatiable bloodlust in the heat of battle. Commander Dante does his best to suppress rumours of the Red Thirst from spreading to the wider Imperium. He desperately seeks a cure for their affliction – a grave burden that he has placed upon the shoulders of Corbulo, the Blood Angels Sanguinary High Priest. 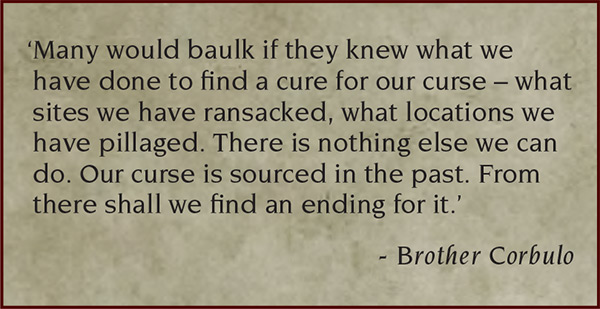 Beneath the surface of every Space Marine who bears the genetic legacy of Sanguinius, a bubbling rage exists – an inner darkness that can only be caged by relentless willpower. To be found wanting is to be plagued by a growing madness. In their final lucid moments, those afflicted by the Black Rage receive the death visions of Sanguinius, endlessly reliving the Primarch’s battle with the Arch-traitor Horus.

At the height of the Siege of Terra, the two met in a fateful duel aboard the Warmaster’s flagship, Vengeful Spirit. Though once they were well matched, Horus was swollen with the power of the Dark Gods, and Sanguinius was weary from many days of fighting – including a second desperate battle with his daemonic nemesis, Ka’Bandha. So did the Warmaster strike the Great Angel down, but the psychic shockwave of Sanguinius’ death had an unexpected effect on his gene-sons. 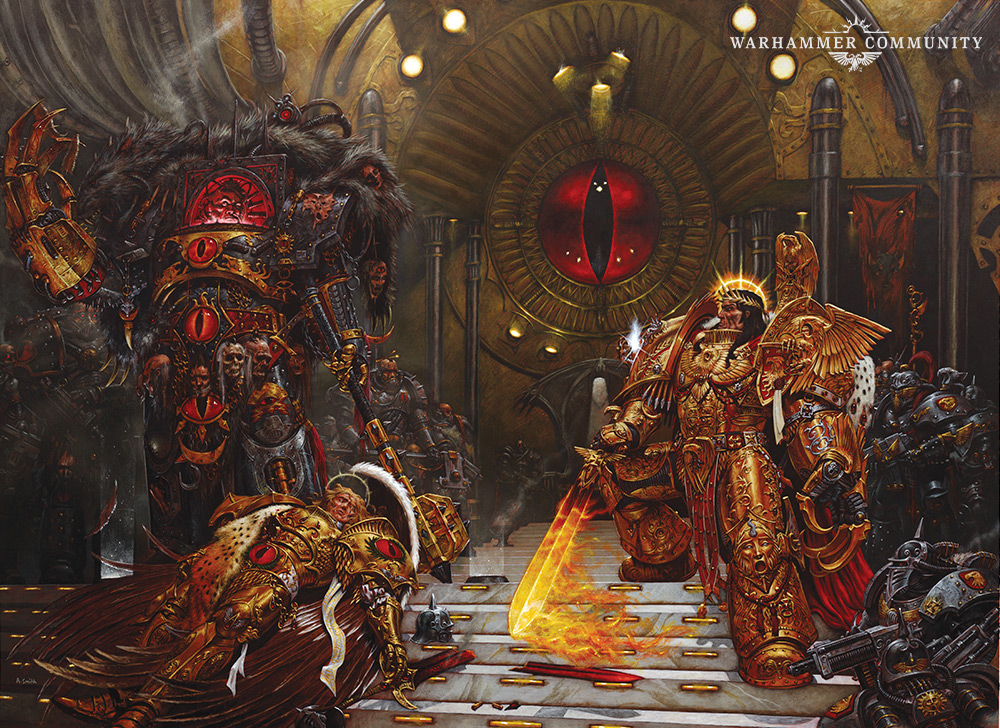 On Terra below, the Blood Angels went utterly berserk, their vision clouded by images of their Primarch’s final moments. They fought as if they themselves were the Great Angel in his desperate battle with Horus. In their madness, the Blood Angels were nigh unstoppable, swiftly turning the tide against the Traitor forces and playing a crucial role in the ultimate defeat of Horus’ ground forces. Though the visions eventually faded, Sanguinius’ death left a permanent psychic imprint within the gene-code of his sons – a flaw that still exists in every Blood Angel more than 10 millennia later.

Ever since, those who fully succumb to the Black Rage are solemnly caged within the Tower of the Lost on Baal, there to howl away their mindless rage without the risk of ‘infecting’ their fellow Blood Angels. However, those who present the defining symptoms on the eve of battle are given the chance to die a warrior’s death. Their armour is ceremoniously painted black, after which they are corralled into the Death Company and unleashed upon the foe. There, the doomed warriors can release their full, terrible fury, tearing through the enemy lines in a horrifyingly savage onslaught before being granted a merciful death. 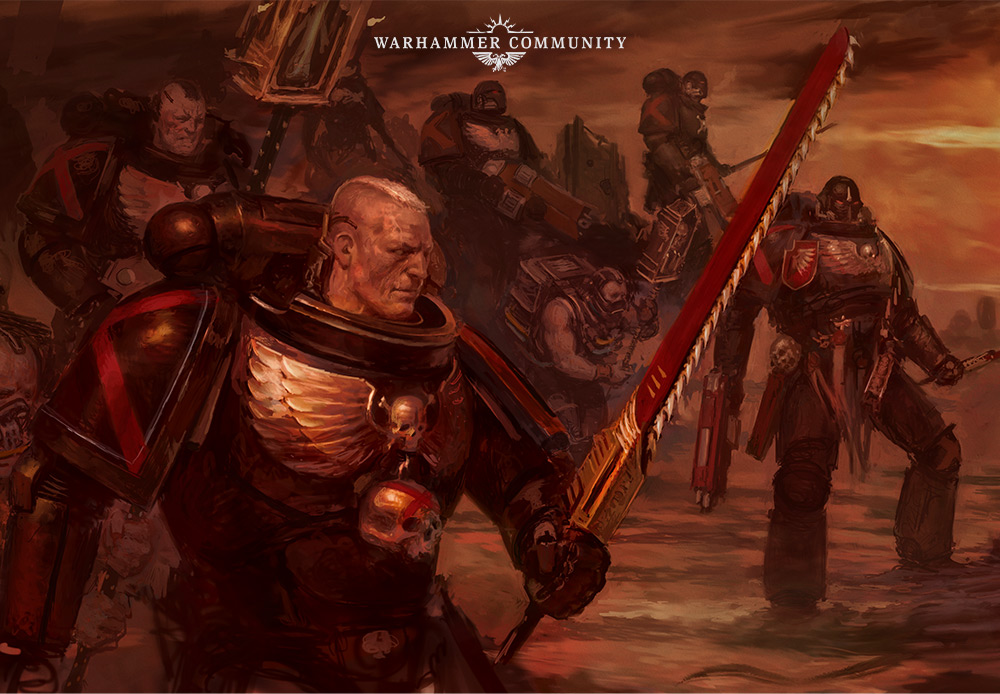 Death of a Legend

During the Third War for Armageddon, Captain Erasmus Tycho of the 3rd Company – one of the Chapter’s most prominent heroes and heir apparent to Commander Dante – fell to the Black Rage. Before the madness took him entirely, Tycho led a massed assault by the Death Company in a forlorn hope against a heavily defended breach in the walls of Hive Tempestora. He died tearing the throat from an Ork Warboss with his gauntlet, the Dead Man’s Hand, even as the enormous greenskin’s power klaw ripped Tycho’s hearts from his chest. It was a hero’s death, but one greatly mourned by the Blood Angels, for his memory stands as a grim reminder that even one as noble and true as Tycho can still succumb to the Black Rage. 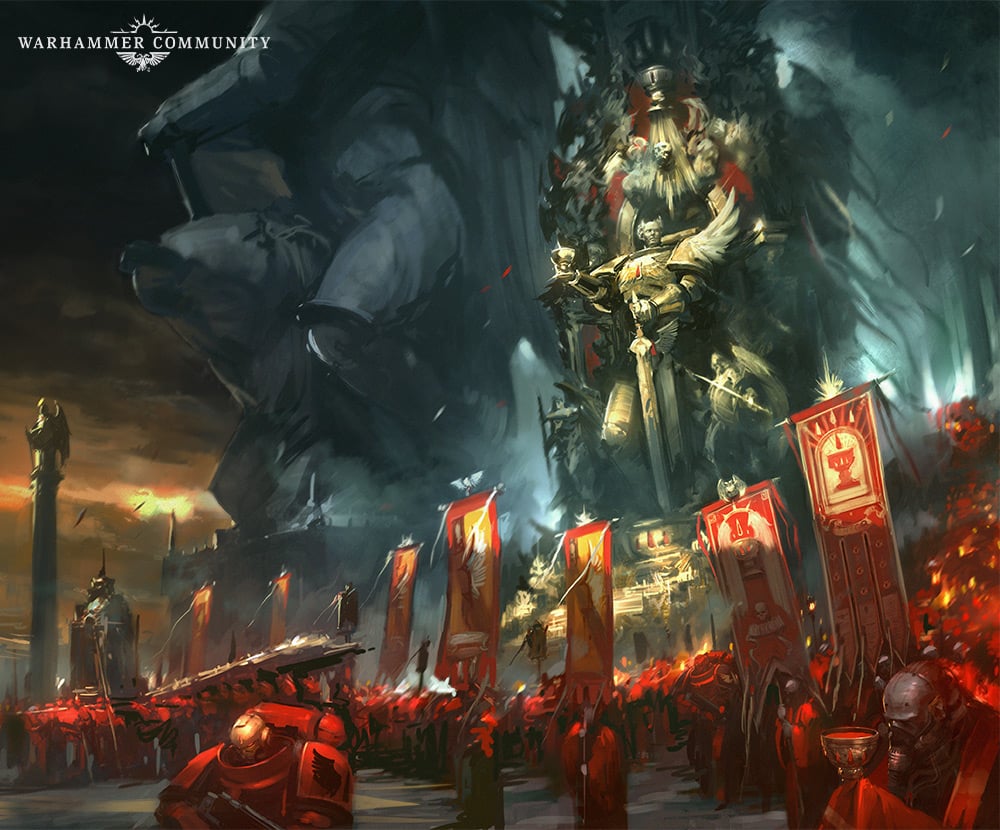 The Lord of Death Rises

Initially, there was a hope that their new Primaris battle-brothers would be immune to the effects of the Flaw, but that too has been dashed. Yet not all is lost for the sons of Sanguinius. Mephiston once conquered the Black Rage, returning from madness more powerful than ever before. Though many in the Chapter are wary of Mephiston, fearful of the unknown price he paid for his apparent victory, he is also manifest proof that the Black Rage can be overcome. Now known as the Lord of Death, Mephiston is the living embodiment of a future that Commander Dante hopes to secure for all the sons of Sanguinius – lasting victory over the curse of the Flaw. 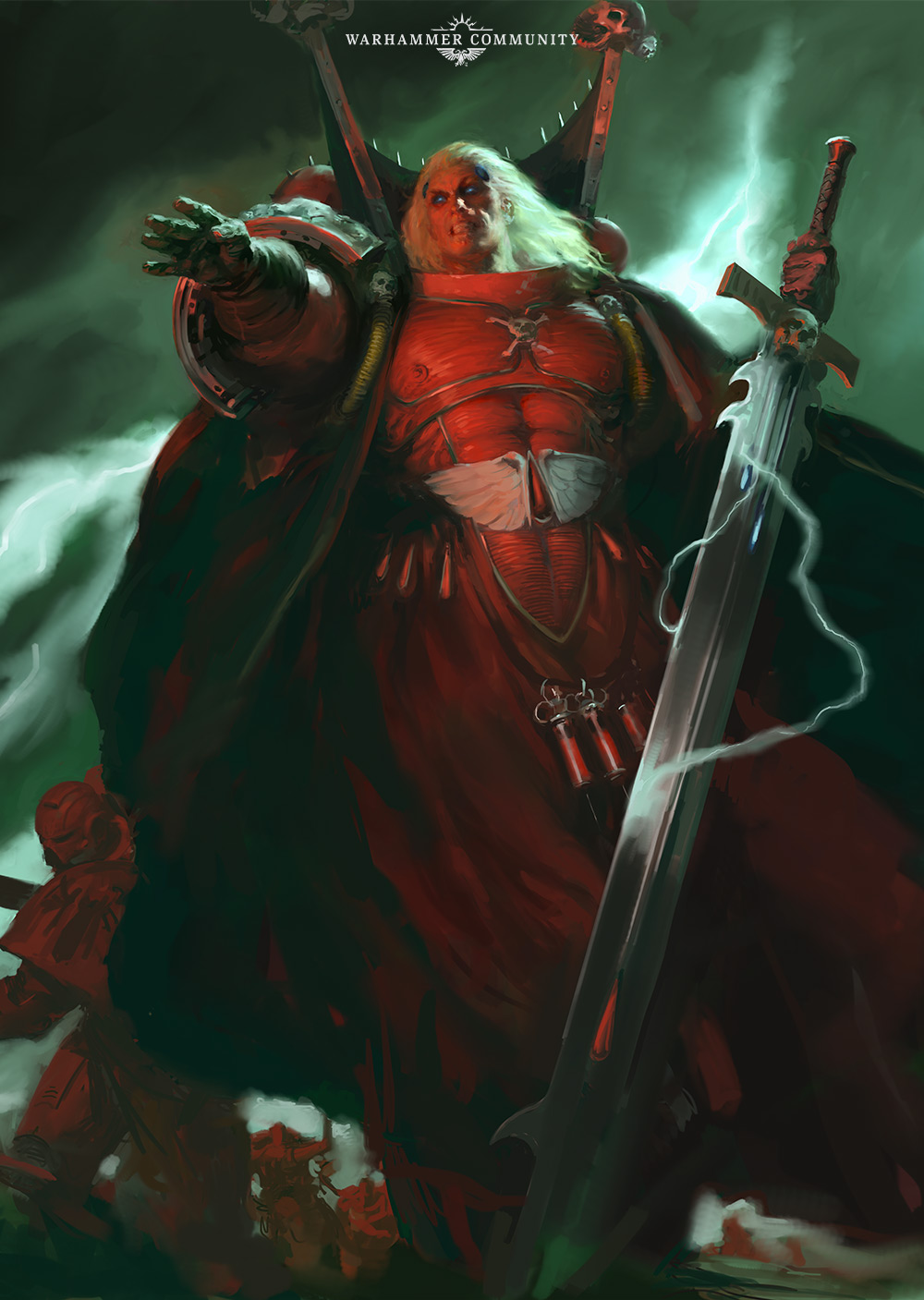 You can look forward to loads of Blood Angels lore and their best rules ever in the upcoming codex supplement for the sons of Sanguinius. The Flaw is a central theme in many of the Chapter’s rules, and we’ll have more insights on how it features in both their army-wide and Crusade rules over the coming days.