Death Guard Getting Some Big Improvements- Here is a Preview 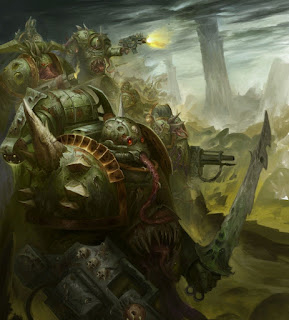 These look like there will be some serious upgrades for this edition. Seriously these are big improvements.

The core of any Death Guard army are the Plague Marines, and now they’re getting even better. Let’s remind ourselves of their stats from the current datasheet.

Toughness 5 Space Marines are nothing to be sneezed at, but what if they had an additional Wound?

Ever since Codex: Space Marines bestowed non-Primaris Space Marines with a pesky extra Wound, Heretic Astartes have been on the back foot. Now Codex: Death Guard makes Plague Marines appropriately difficult to dispatch – and it’s just a taste of what’s to come for Chaos Space Marines in the future.

As you can see, Plague Marines are also getting an extra Attack. Combine these changes with their new Remorseless and Contagions of Nurgle abilities* and they’re going to be a real force to be reckoned with on the tabletop.

The Plague Marines aren’t the only unit getting a close-combat boost. The twisted and mutated Death Guard Possessed are losing their current Writhing Tentacles rule in favour of a flat number of Attacks – four!

You’ll no longer have to worry about the fickle dice gods abandoning you at a crucial moment. The horrifying mutations that they use as weapons have also been improved, gaining the Plague Weapon ability.

Grandfather Nurgle has also blessed them with an extra point of Toughness as well as granting them the Remorseless and Contagions of Nurgle abilities.

The Death Guard’s Daemon Engines have pretty much all been improved across the board, so expect to see columns of Myphitic Blight-Haulers and Plagueburst Crawlers trundling over the battlefield. Just take a look at the new profile for the Defiler – it’s better at shooting, better at fighting, AND it has more Attacks.

As with the improvements to Plague Marines, the upgrades to Daemon Engines will also be carried over to the other Heretic Astartes armies when they get their new codex.

The new Death Guard codex is available to pre-order soon