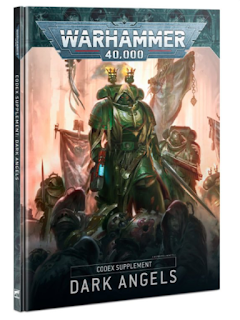 The Next Big Narrative for Warhammer 40,000- Rust and Rot is here. Is this a possibility that the Dark Mechanicus will be coming? It certainly looks like GW is laying down the foundation for the perfect storm to bring them in.

We will be updating as the event continues. 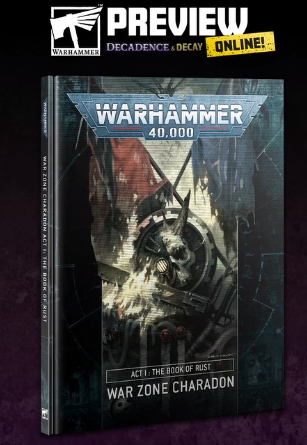 Death Guard sent by Abbaddon to take Metallica ( A Primary Forgeworld). A new move by the forces of Chaos.

There are new rules for many factions including Death Guard, Imperial Knights, Drukhari, and more.

There’s more than just the background of an epic war zone in here, the book also includes new rules for:

The warriors of Commorragh are keen to take advantage of the chaos and confusion caused by Typhus’ invasion. Alongside these codex supplements are rules for playing through the Charadon campaign yourself. Can you claim Metalica for the Death Guard or will you try to stop Typhus?

The Plague Purge Mission Pack allows everyone to join the fun in the Charadon war zone with a host of specific Crusade rules. Send your army campaigning through a land of rust and decay, and pick up some new relics and abilities along the way. In the same way as Beyond the Veil, this pack gives you a whole new region of space to set your campaigns in. 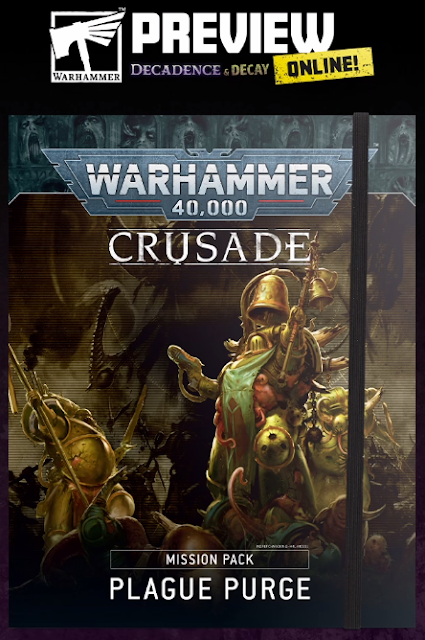 This codex supplement is packed with indispensable background on the most secretive of all of the Space Marine Chapters. You’ll also be able to:

With Deathwing Vanguard Detachments and Ravenwing Outrider Detachments both getting the Objective Secured ability on some of their key units, you’ll be able to field some incredibly powerful and tactically flexible, mixed Dark Angels armies.

The codex supplement also introduces some amazing new Crusade rules. With a focus, unsurprisingly, on hunting the Fallen, your army gains new rules and abilities as they catch these traitors to the Imperium. Even better, once you catch them, you can interrogate them! 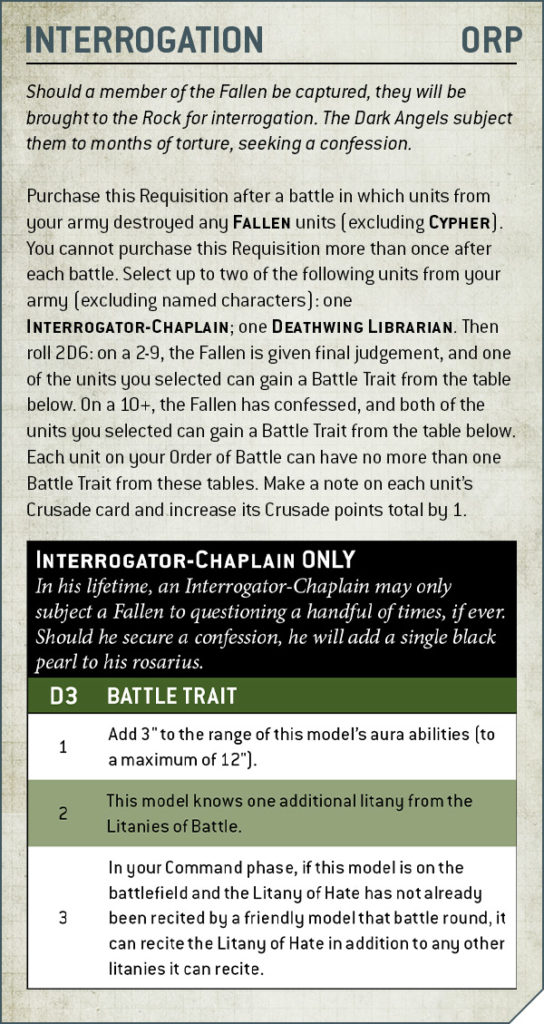 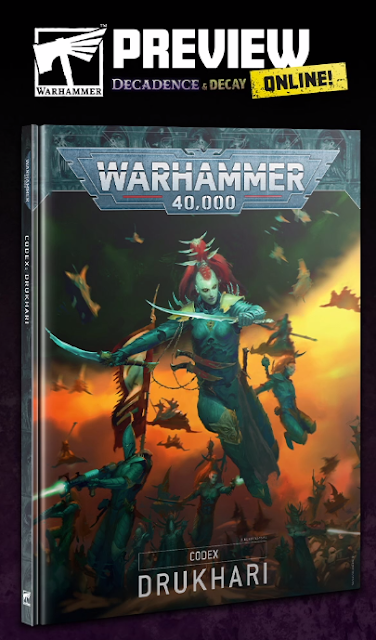 Drukhari Rules- Incubi get nasty
The first xenos codex of 2021 makes the Drukhari faster and deadlier than ever before. You’ll see:
More attacks
Higher damage
Lethal combat output across the board
The stabbiest of the Aeldari are about to get stabbier. Their new rules allow you to take the realspace raiding force you’ve dreamed of without being penalised in Command point cost. Want to run a pure Wych cult? You can do that. Have an urge to mix up Kabals with Haemonculi Covens? Do it! The book also introduces new Crusade rules that allow you to expand your influence and become a feared crime lord of Commorragh.
Whether you’re planning a mighty realspace raid or starting a Crusade army, you’ll definitely want to include some Incubi, who are now more lethal than ever.

Incubi will easily slice through anything that gets in their way. Now that their klaives are Damage 2, even Space Marines will be no match for them in combat.
Don’t worry, though – the galaxy isn’t entirely at the mercy of the new Drukhari threat. Here come the Dark Angels with a new codex supplement that you’re bound to fall in love with.
Necromunda
Van Saar 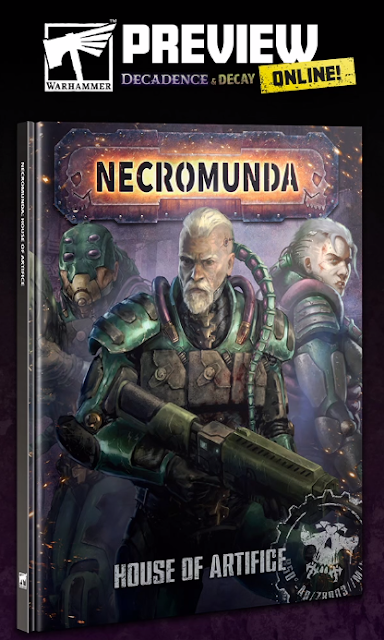 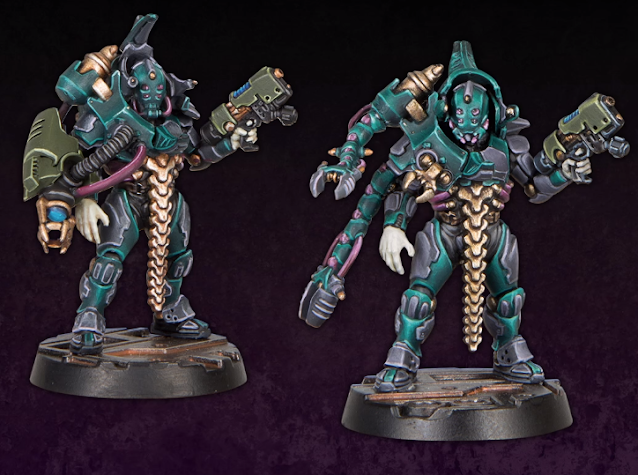 Along with in-depth background on House Van Saar, the book includes: 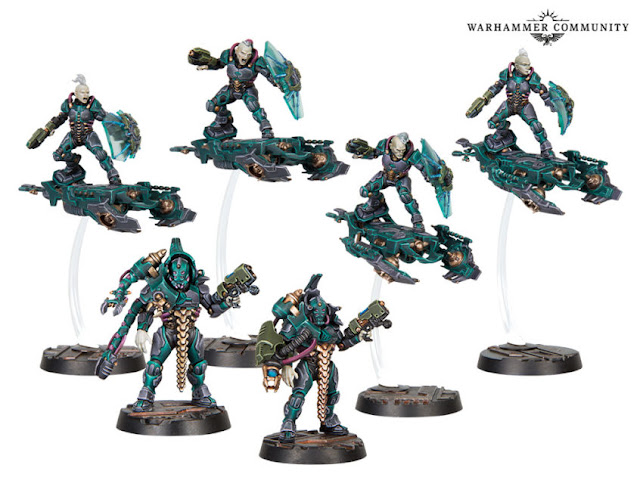 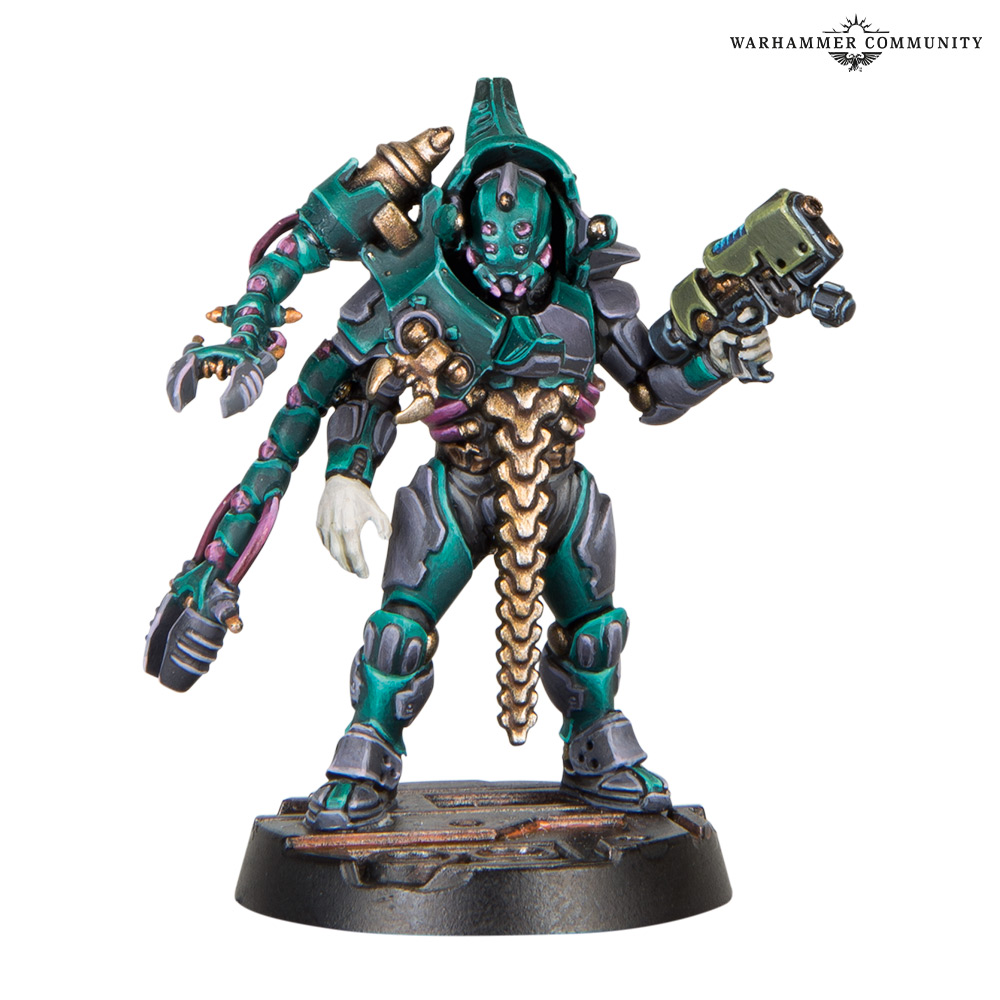 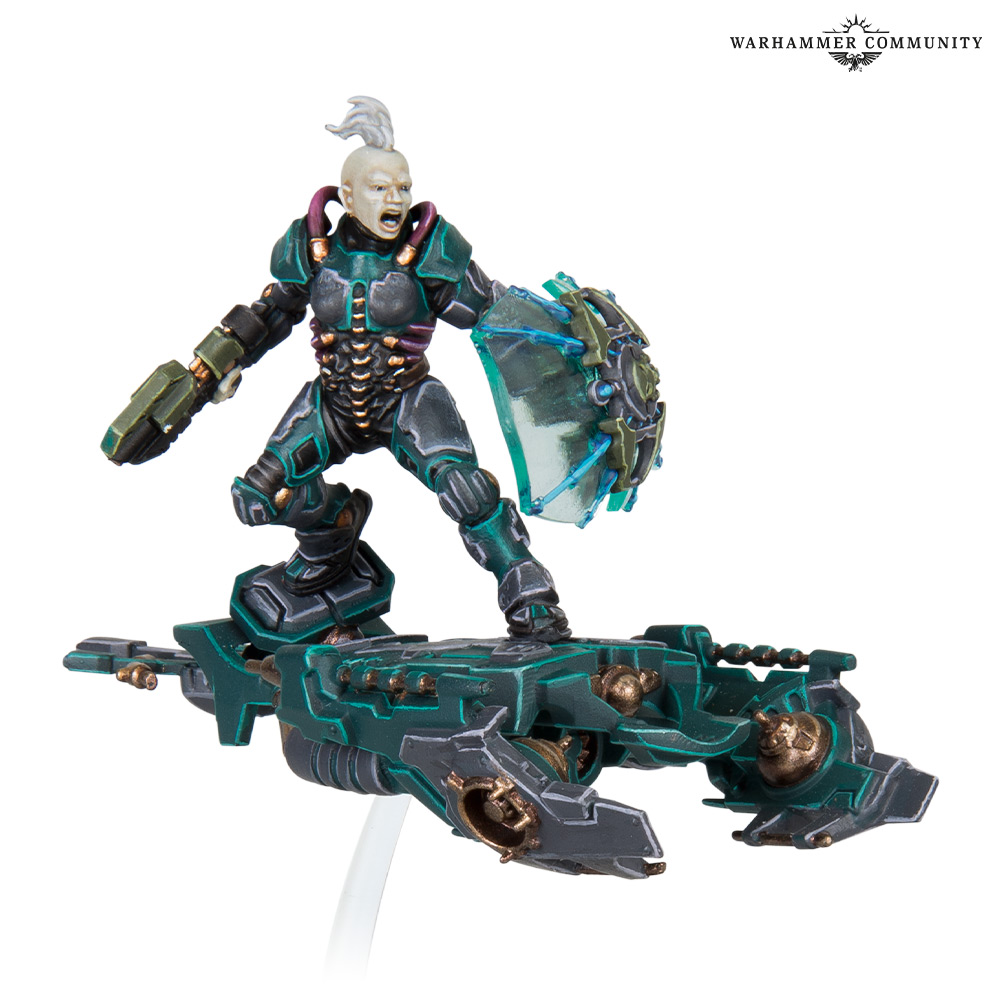 These units represent the two ends of the experience scale in the Van Saar gang. Archeoteks have mastered the most potent of the clan’s technology over many years. Meanwhile, Neoteks are young hotheads, flying around on their grav-cutters, trying to avoid the low-hanging dangers of the underhive. Obviously, members of other gangs just shake their fists and mutter about the “juves these days”. 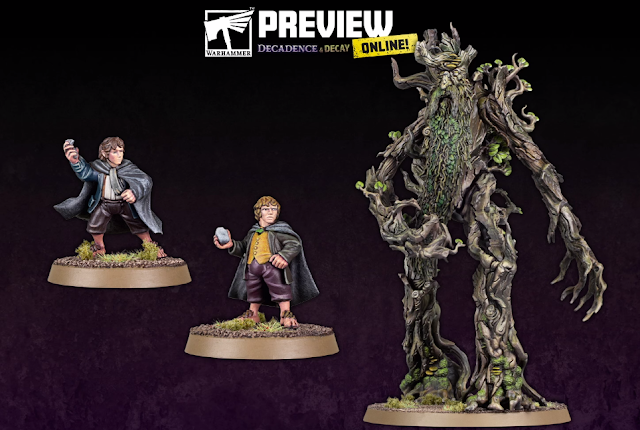 Fans of the Middle-earth Strategy Battle Game are going to be exTREEmely excited about our next reveal. In fact, you won’t beLEAF what we’re going to show you!
This is the first time that Treebeard has been seen in plastic. Not only is it an incredible model, but he’s also a force to be reckoned with on the tabletop.
NovPreview Nov21 ME Content1hscdc
Treebeard even comes with new models of Merry and Pippin, and you can have them seated on top of the Ent or separate. Eagle-eyed viewers might notice that the Hobbits are bigger than their previous models – that’s because they’ve been drinking Ent-draught! Oh, and if you think we’re going to apologise for those puns then you’re BARKing up the wrong tree.
Underworlds Expansion 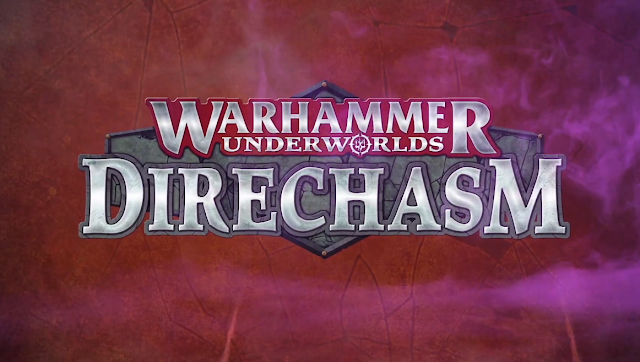 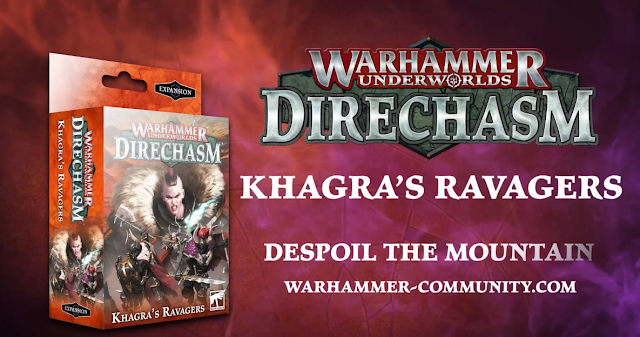 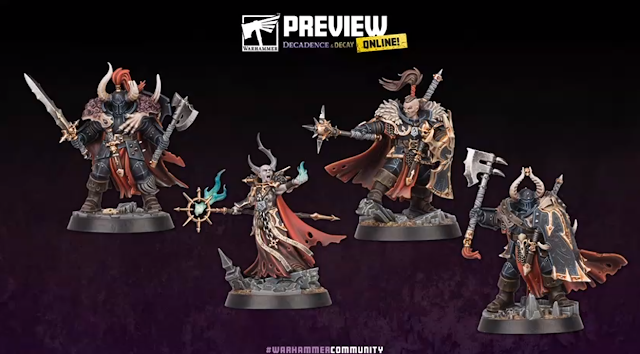 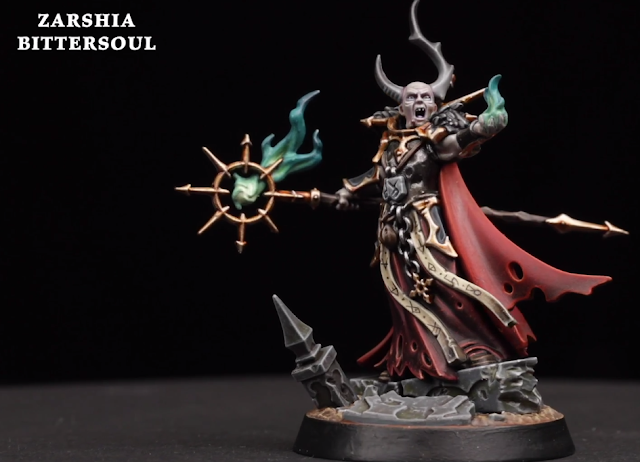 We know that the Direchasm boxed set drops in just a few short weeks, and we’re going to look at the first warband expansion for the new season of Warhammer Underworlds. Get ready to hack, slash, and zap your way to glory with Khagra’s Ravagers.
This Slaves to Darkness warband is led by a pair of sisters – one a wizard, the other a warrior. It’s good to see that even amongst Chaos-worshipping mortals seeking to desecrate a living mountain, families stick together.
Age of Sigmar
Yes, it’s the glorious return of Sigvald! This fan favourite from the world-that-was is making a triumphant return – well, we knew that Slaanesh would have to give him a chance to get vengeance after that incident with the troll.* 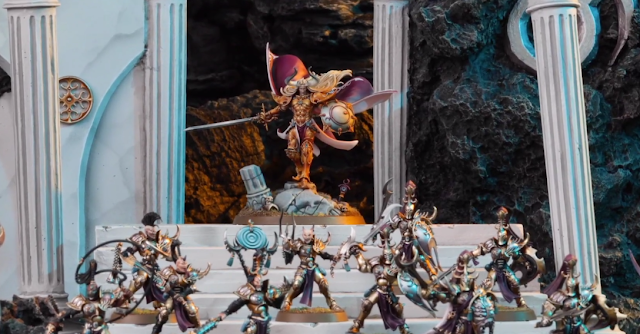 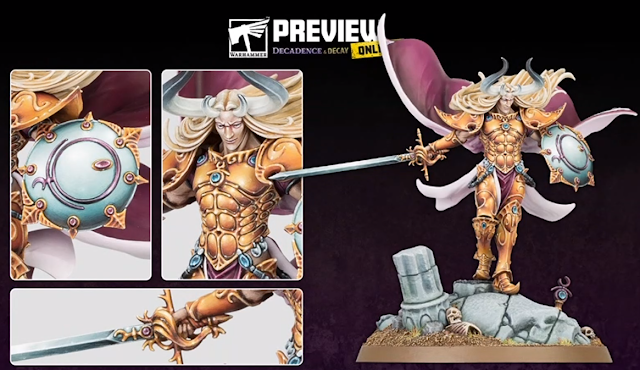 The new model is bigger and better looking than ever, which is a bold claim since Sigvald was already extremely beautiful, but come on, just look at that flowing mane. Glorious.
Of course, we couldn’t showcase such a magnificent character without also giving you a peek at some of the forces he’ll be commanding. First up are the Myrmidesh Painbringers. That’s not just a clever name, either – armed with wicked scimitars, this is a unit that will definitely be bringing the pain.
Then there are the Symbaresh Twinsouls. These are mortals who have forged dark pacts with the lesser daemons of Slaanesh, sharing their bodies in return for a measure of their power.
Only time will tell who got the better end of that deal…
Wow! That’s a LOT of great stuff on the way. We’ll be taking in-depth looks at everything as we get closer to their releases, so make sure that you’re signed up to our newsletter to get the latest info delivered straight to your inbox. If you enjoyed this, you’ll definitely want to tune into the next Preview Online, which will be full of Black Library goodness – stay tuned in the next week to learn more.
11/21/2020
Natfka
40k, Dark Angels, Drukhari, Top Stories, Warhammer