There is a new faction coming, and today Warhammer Community made the announcement that the Deathrattle Sepulchral Guard will be available for the game.

In the game of Warhammer Underworlds, this warband plays in a unique way. They’ll have numbers on their side against most opponents, but they lack the furious damage output of the Bloodbound, or the resilience of the Stormcast Eternals. Instead, this Deathrattle force favours a player with a considered, strategic approach to battle. They have plenty of tricks up their ragged sleeves to tip a combat in their favour, chief amongst them being the Sepulchral Warden’s ability to inspire and bolster the other undead warriors around him.

Let’s take a moment to look at those models as well. 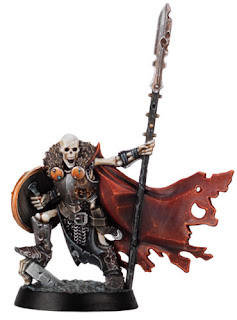 These are our best skeleton miniatures ever – every one of them is as dynamic and detailed as you could hope for, and these are clip-together models, needing no glue at all to assemble! Like all Warhammer Underworlds: Shadespire models, you can be playing a game with these new skeletons mere moments after taking them out of the box.

We know loads of you Death fans have been patient as the grave waiting for new miniatures since the Age of Sigmar began, and these guys don’t disappoint. The new models match the scale of our current Deathrattle range, and they’ll look just as great striding to battle in those vast legions as they will slaying interlopers in the cursed city of Shadespire.