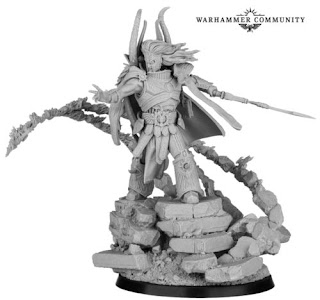 The next Primarch is coming at the end of the May, Magnus the Red.

Keep an eye out at Warhammer Fest for this guy…
Our Warhammer Fest event in Coventry at the end of May will be the first place in the world your can get your hands on the next Horus Heresy Primarch.

Magnus the Red, the Crimson King, Lord of Prospero – famous and infamous in equal measure for being perhaps the second most powerful psyker in the Imperium, after his father the Emperor.

We have, of course, already seen the daemonic incarnation of Magnus in the 41st Millennium. This version, while still towering over his brother Primarchs, is not on quite the same scale (which has the advantage that you can fit in a Land Raider of course.)

You can pick him up for the first time at Warhammer Fest (which, incidentally, is also hosting a Horus Heresy Grand Tournament).