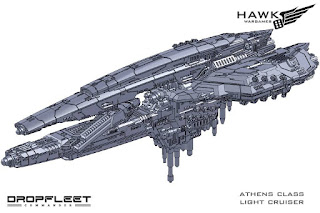 Ive been playing a ton of Dropfleet Command lately, and of course Dropzone Commander is still a great game. Today we are looking new show only models being released by Hawk Wargames for both games.

Show only models from Hawk Wargames are variant models to existing classes of ships and other models. These are very cool, and if you can't get to one, you are not missing out on game play. 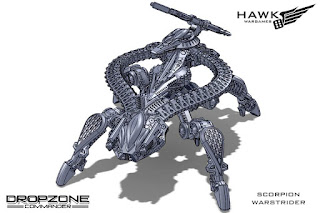 For Dropzone Commander, we have the Scorpion Warstrider, which is a model variant on the Jaguar Warstrider for the Shaltari, the rules for which can be found in the Core Dropzone Commander Rulebook. This variant has 4 legs making it very different in looks from its Jaguar relative.

Both of these models will be available at Salute in limited numbers, but will be available from many of the shows that Hawk Wargames will be at from now until April 2018. Visit the booth early to ensure you pick up one of these and a few other of the select show only sets. Along with these we will of course have both Dropzone Commander and Dropfleet Commander ranges available on our stand, along with 4 demo tables and the 10ft Avenger model.

Due to there being a number of Saratoga Class Light Cruiser models that are still to go out from orders placed, we will not have this on sale at Salute (we are shipping them out as quickly as we can manufacture these). However, we will be extending the time that this product is on sale on our site to allow for those who were planning to get one at Salute. This will extend to the end of April 2017.
We look forward to seeing many of you at the show this Saturday!