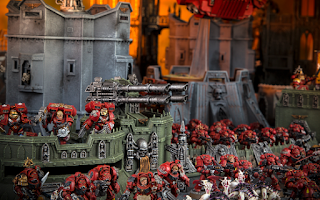 Games Workshop later today expanded upon the three ways to play over on the Warhammer Community site.


Here is a brief on what was being said.


Open play is the most flexible system – where you can use any models you like in a game to achieve any sort of objective you like. You can play archetypal scenarios like raids, ambushes or desperate last-stands with “What If” themes, set up races between vehicles, or even use the classic “who would win in a fight between…” as a catalyst for a game with undeniable appeal.

Narrative play is just what it sounds like – fighting battles based on stories from the far future, whether from campaign books, Black Library novels or legends of your own creation. Perhaps they even form part of an ongoing campaign, or are set in the notorious war zones of the 41st Millennium, such as Armageddon, Cadia, Fenris, Baal… the list goes on. Playing games that tell part of a larger story is what narrative play is all about.

Matched play is the final type of play-style. This system will be very familiar to those of you who play Warhammer 40,000 regularly now. Like the game today, it is based around one of two mission tables of 6 possible battles – either Eternal War, or Maelstrom of War, though the missions briefs have all been updated a little.

Your armies for matched play games will always be Battle-forged (more on that in future) and use points values to help ensure a balanced game. Rules and points for every single model in the game are being realigned for the new edition – so expect to see many units that might have been absent from competitive play make a welcome return. Army selection is still quite open though, and if you have a Battle-forged army for the current edition of Warhammer 40,000, you’ll be able to build a Battle-forged army for the new edition as well.

Matched play also has a few extra rules that impact the game itself, mostly to do with things like deploying reserves, summoning or generating reinforcements, using psychic powers and limiting how often you can use your army’s Stratagems (more on those soon).


The matched play section also has some recommendations for event organisers: things like how much time certain sizes of game will take to play and what size board they would typically be played on – for example, a game of 1,000-2,000 points takes just over 2 hours and will be played on a 6’x4′ board.
4/24/2017
Natfka
40k, 8th Edition, Warhammer 40k