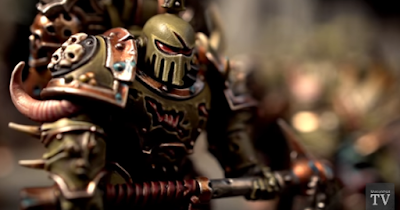 The new starter set is Death Guard vs Ultramarines and is coming on June 17th. We dont quite yet have a model count, but it looks like there is going to be quite a bit in the box. Also below we are being told that we will get to choose our Warlord Traits and Psychic Powers.... nice.


Again this source is rather solid with the information, but again consider these rumors until we get official release information.

via Sources on Faeit 212
Starter Set
The starter set goes live the 17th and is going to be Death Guard Vs. Ultramarines, $120 box.  Chaos gets a blob of cultists, a few terminators, a few plague marines, a lord, and drones.  Loyalists get 2 tactical squads, a devastator, an assault squad, plus a librarian and a captain.  Comes with dice and rulers as well.

In addition, there will be the standard soft cover core rules booklet and a small campaign book.  The campaign book has the stats for all the dudes in the box, plus a series of narrative missions that set up the ground floor for the first real story arc of the new edition.

Codex
AoS was very much a test kitchen for what to expect of the “New Warhammer 40k”.  AoS had a rocky start, but they learned from their mistakes, and recently even AoS has surpassed 40k in some regards.

The battle tome will become the template for the codex, not the other way around.  Each dex will get the special army wide rules, 6-12 relics, 6 warlord traits, and 6 psychic powers, only now it’s written that you can chose to ether select or roll on warlord/psychic charts.  It will also contain full rules and points for all the old and new units in a given army, and special rules for things like warbands, campaigns, narrative missions and the like.

Formations are back, but they cost points now, and so are decurons, but they will be a lot more flexible and take cues from their AoS counterparts.

Overview
6th and 7th edition suffered from growing pains and an identity crisis.  GW spent a good amount of time and money figuring out what they want 8th edition to really feel like, and are using what they learned in 40k 6th-7th edition and AoS V1.0-1.2 to rebuild 40k from the ground up.  They want new players to feel less intimidated by the dense lore and setting, but want to keep returning players invested in the storyline.  Black library is going to do a soft reboot for some of the new 40k lore books, with a gimmicky “New Warhammer” type flagship launch to, as I said before, laydown a ground floor for the upcoming 8th edition.