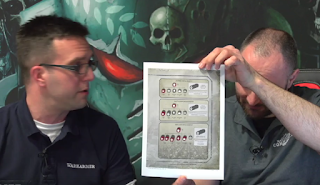 I will be updating this as I listen in, with a full wrap up later on for all that I miss the first time around.


Starting here.
Movement is definitely in

Vehicles do not have armor values. Vehicles have a damage table that reduces their stats as they take damage.

Different Armies will keep their playstyles

All models will receive rules in the new edition, including vehicles and scenery

Templates are going away

A lot of playtesting has gone on. Reese and Frankie from Las Vegas Open, and Mike from Nova have done tons of the playtesting.

Everyone will get their new rules day 1. 5 books, will have the rules for all the armies at a very low price point.

Expansions like cities of death, planet strike, will be brought up to speed.

Every unit has been playtested and has been balanced. This will be the most robust and balanced edition of 40k. there wont be any broken units like riptides

There will be an annual update book "like the Generals Handbook"

They want the game to evolve the game with community feedback.

Yes there will be an army builder app, but its not ready yet.

There are not specific tournament rules, but there are guidelines for organizers.

They are pushing the thematic battle between the Imperium and Chaos, so they are focusing on it.

2 different ways to play with point values.
Power Level: narrative play- gives you values for squads regardless of what they are equipped with
Matched Play: Full points with upgrades like normal detail

All current armies will be in the new edition.

Everything can hurt everything.... lasguns hurting tanks was mentioned

Allied forces will still be available. Cross army bonuses will be limited now, meaning that a space marine army will give bonuses to other adeptus astartes models.

Still has an allied chart.

Deathstars were called loopholes in the rules.

Keywords structure for the game for rules.

There are Benefits to sticking to a single faction like command points.

There was a little oversight on the new galaxy map, so no many places were not destroyed.

the term "8th" was mentioned

Forgeworld rules will be available in the same way.

Storyline will continue forward for the next few years, but with no radical changes to storyline.


If you just bought a codex or rulebook.... The customer service team will be handing out vouchers within 8 weeks of the announcement to cover the cost of the rulebook.


The QnA has ended. 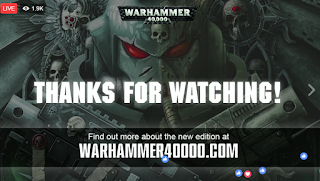