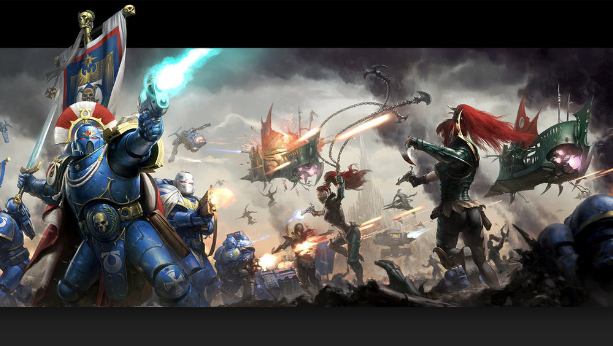 This is an awesome set of details on the release schedule, what it will look like, and a lot more. A huge break for us to get a look ahead like this. Literally awesome, and its going to be a fun month of May of June!!!!


This looks very solid as far as rumors go, although it's not official until GW makes it so.

Day one any beyond:

June 10th launch, they’re going to drip feed us rumors for the rest of  May.  Expect to see full Space Marine datasheets sometime around the end of next week, with a couple of fluff pieces talking about how the galaxy got ripped in half and how all the marines got taller.

For those of you who are saving your pennies, here’s what the launch schedule looked like so far.

About 1-2 weeks beforehand all 7th edition exclusive products are being pulled from stores for good. Codex’s, Rulebooks, Dark Vengeance, not the new campaign books such as Gathering Storm sense those are still fluff pieces, but expect those to become much harder to find.

Than on day 1:  5 new, free soft cover/PDFs launch with all the core 8th edition rules.

They are:
The Rules:  Containing your prophesized 12 pages of core rules, plus outlines for open play and the 14 universal FoC, ranging from 1 HQ and 1 Troop choice 1 command point allies to massive 20+ slot charts that grants a fist full of command.  The new force org charts are pitched as a great way customize your army, one of them is a big guns esqu 1 troop/HQ 5+ Heavy support, but really they’re just designed to scale command points to game size.

A few of the wilder ones, such as the aforementioned big guns list, have restrictions and special rules that might sway player one way or the other in terms of army composition, but the more well-rounded ones grant the most command points (which are such a big deal. I cannot stress this enough, proper use of command points can make or break strategies), and the real meat and potato special rules granting armies are going to be built from the FoC structures found in your army codex, once they bring those back.

The free PDF version of the following books will be sectioned up amongst
faction lines, but the paper ones are going to be the mashups listed below.

Armies of the Imperium: Exactly what it says on the cover, a splash of lore
and datasheets for every imperial unit in the game.

Armies of chaos:  The spiky version of the above.

Armies of Xenos: Split up among proper faction lines (Eldar, Tau, Necron, Nids), and containing datasheets and rules for the rest.

A galaxy in flames:  Art and fluff book.  Brings everyone up to speed on the setting, pushing the story forward by a few weeks and setting up the opening of a AoS style narrative campaign.

DO NOT READ BELOW IF YOU DO NOT WANT SPOILERS
Seriously though, who is not going to want spoilers.

Spoilers: the “official” story is something about Guilliman’s gene seed,
but it’s heavily hinted at that there’s some kind of tech heresy at play
and Mars is having a mini end times of their own.  And some of the new
imperial units are going to be new, like honest to goodness, we swear they
didn’t fish these out of a closet, someone just invented these new.