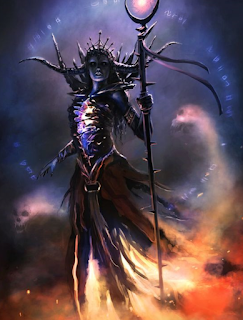 Protecting the worlds of Genesys from its own destruction, the Temporal Keepers manipulate the threads of time to insure its survival.

"The Keepers can foresee glimpses of death and darkness in the distant future, and they believe everything must be guided along their path to ensure the survival of all realms."


The Genesys Project
To join in and see what the latest for the Genesys Project, head on over and sign up to get your free product code and jump right into the open beta.
http://www.thegenesysproject.com


--Class Lore--
Temporal Keepers
Their Ethereal realm is a plane of ash and dust, and the ruins of countless civilizations lost to time – or those that will be lost. Fragments of time drifts across the winds, moments of the past and threads of the future barely visible in the motes of drifting ash. The Keepers make their home here, collecting motes of ash and threads of the future. They, perhaps uniquely amongst the Fey, foresaw the mortal’s growing attunement to the Ethereal, and recognized the rifts it could spread through the Ethereal Realms. To this end, the Keepers carefully cultivate and manage civilizations and their ethereal evolution. They use subterfuge, infiltration, and abduction to guide mortals along the Path that the Keepers alone dare to dictate. Of course, the future, and time, is impossible to truly understand – whenever a species stray from the path, the Keepers destroy it and salt the earth they once stood upon. The Keepers can foresee glimpses of death and darkness in the distant future, and they believe everything must be guided along their path to ensure the survival of all realms. 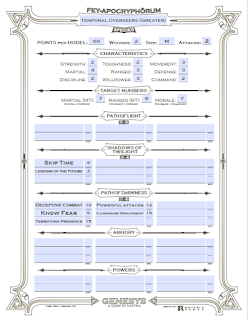 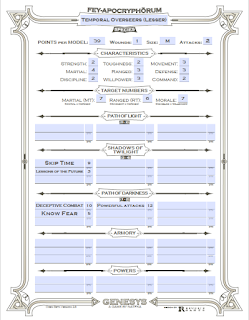 Disciples
All disciples of the Keepers were once degenerative, fearful creatures that cowered beneath the massive structures of past and future; afraid to build, lest their own cities one day add to the pile of rubble. Now, fresh with purpose, the Disciples gather in clans based on the thread of destiny they foresee for themselves. They guide other species, shepherd them along the Once Path - Masterful at the art of deceit, attuned with time, and merciless in their fury, they participate in battles when other options are closed to them. They make sure every thread is aligned perfectly before delivering the final blow. 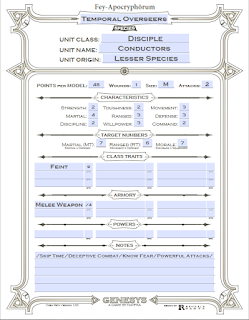 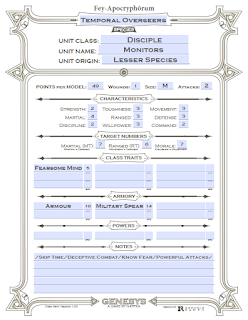 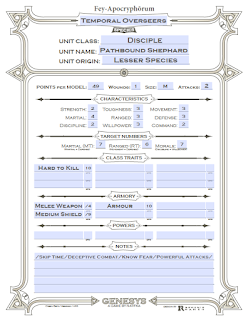 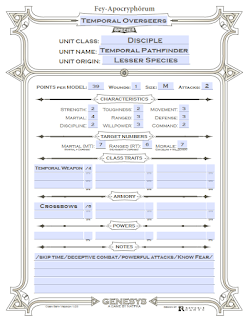 Covert Exemplar
These Keepers were the first to see, back in a distant age, the call of the Creators. They glimpsed in the dust that covered an object of star-streaked metal, and prepared for a grand purpose. Now, they go out and hide among other species, melding seamlessly into their cultures and influencing them down the Once Path. They have mastered the Sphere of Deceit, and use it to ensure that the outcome of every confrontation has been decided long before it has begun. 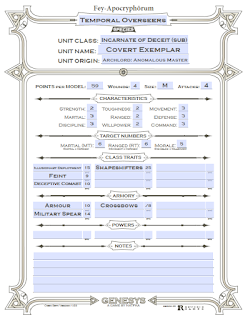 Rebel Archlord
Many other Fey view the Keepers with abhorrence. Those that believe in the light view the Keeper’s purpose as a dark perversion, a single-minded view of the future that must be stopped. Those of twilight see it simply as false, and treat the Keepers as mad. Those of darkness view the keepers with wariness, for their path, while dark, holds hints of light. In spite of this, every once and while a Fey will become enlightened to the Ocne Path – It is unknown how, or why, but these Fey turn their backs on their own paths. They infiltrate the realms of the Fey, hidden in the higher echelons of command for years and centuries. Yet, at the King’s beckon, they rush to the side of the Keepers and turn their weapons on their once-kin.


Eldritch Annihilator
When a city has reached a critical point where they can no longer be guided, and their power in the Ethereal becomes too unstable, the Keepers are forced to destroy all remnants of that place. The Eldritch Beasts fulfill this capacity ably; they only attack at the behest of the Paragon, and no two are ever alike. They move independently of Keeper forces, fulfilling the King’s wishes – Taskmasters must plan accordingly for the single-minded and purpose-filled beasts. They will, sometimes, run to their target for miles, providing time for the Keepers to move into position – at other times, a Taskmaster will reach the target only to find the Eldritch Annihilator at the center, like a long-ago seeded plant suddenly sprouted. 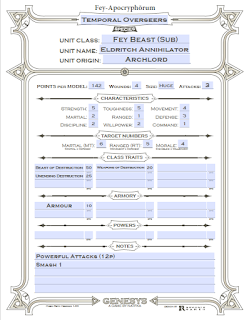 Anomalous Master
On occasion, an Exemplar will find themselves filled with a vision of something that cannot be. A presence fills their minds, their hearts, and changes them - they grow in size, the bearing becomes more regal, and time shatters around their shifting form. Taskmasters do not truly understand what is they become, and the King never tells. The anomaly’s tear through the heart of the foe with relentless efficiency, and no Keeper that has witnessed them envies their fate. Once the battle is concluded, the anomaly shatters into the dust of ages, and drifts back to their home. 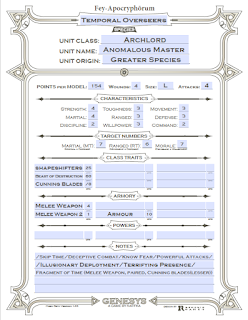 Taskmaster
The Taskmasters represent the master general of the Keepers, appointed by the Paragon himself. They can read the threads of the future more ably than their lesser, and can manage a dozen visions of time at once. They compile this to execute masterful plans, moving other species like pawns on a chessboard. They ensure that everything has been perfectly calculated before battle, the odds stacked against their opponent in every conceivable way. Their destinies are unknown to themselves, however. Their weapons are forged in a future time, ripped through tears in the Ethereal – unbreakable, it is said, only to shatter at the very moment a Taskmaster is fated to die. 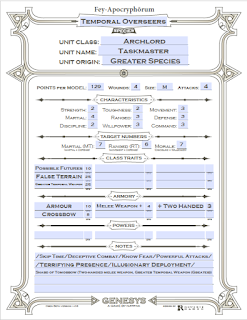 The Once and Future King
In the beginning, the Keepers had no Paragon. It is said that the Great Beast they called master was slain by another, but that knowledge exists only in myth. Without a guiding force, the Keepers were nothing. And yet, against all reason and destiny, a new Paragon appeared. Taller than any Keeper, clad in baroque armour fitted to betray any misconception of a physical form, the King made himself a colossal spire amid the dusty plane. He sits upon his throne, dictating the Path to the Keepers and ensuring that his visions come to fruition. He scours the Ethereal, and decides the fate of all he touches. Rarely does the Once and Future King enter battle; only when another Paragon appears does he draw his Time-forged Ethereal weapon, and only when an obscure artifact needs to be recovered does he command.
His true motives are unknown to all, but actions seem to betray hindsight, rather than foresight. 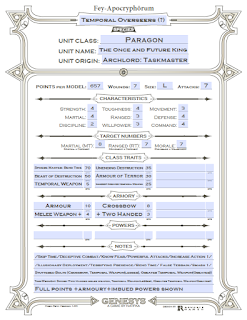