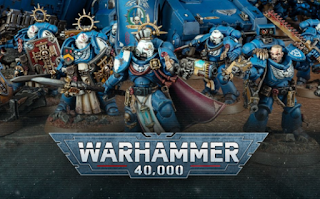 The Emperor's Spears are a White Dwarf chapter of Space Marines with the Lore and background in this month's White Dwarf written by Aaron Dembski-Bowden (One of everyone's top Black Library writers).

The Chapter planet of the Emperor’s Spears is Nemeton, and the Index Astartes reveals more about their lush green home world. It explores why this storm world was chosen as a stronghold from which the Chapter could recruit and perform the solemn duty for which it had been founded – to serve among the Adeptus Vaelarii, the Sentinels of the Veil. 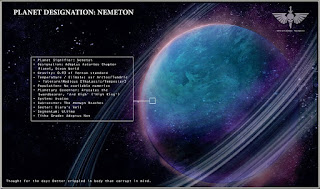 Nemeton itself is populated by tribes of feral barbarians, whose harsh living conditions and warlike ways make them perfect aspirants for recruitment into the Chapter. However, the lore reveals that the Spears of the Emperor have a rather uneasy bond with the clans of Nemeton. 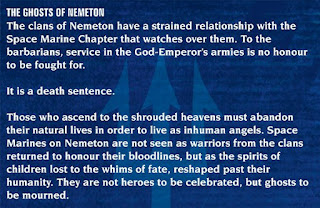 Fans of the Celestial Lions may know about the vast region of scattered worlds that form Elara’s Veil. This sub-sector had initially been under the Chapter’s sole stewardship – a thankless task which their proud warriors had long been hard-pressed to perform alone. Eventually, the Celestial Lions were reinforced with two new Chapters from the Twenty-Fifth (or Bastion) Founding to aid them – the Star Scorpions and the Emperor’s Spears – creating the Adeptus Vaelarii.

But suffice it to say that the things didn’t go especially well for the Star Scorpions, and the Celestial Lions fared little better when an Inquisitorial purge all but decimated their Chapter. Yet despite the ill fate of their fellow Vaelarii, the Emperor’s Spears remain undaunted, staying true to their vow to defend Elara’s Veil. 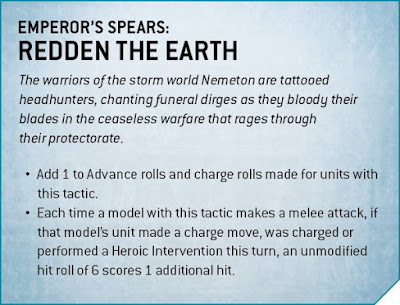