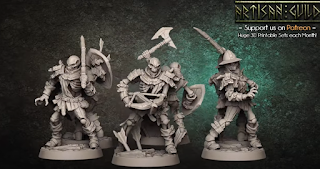 February is coming and so are the new 3D Patreon releases. This one is so modular that its hard to see this not working for most people.

via the Artisan Guild Patreon

Ancient soldiers who betrayed their lost kingdom and were condemned to undeath, turned into walking skeletons for eternity. They are now bound to follow their undead general and the evil Lich Skulkator, forever.

During the siege of the City-State of Torm, these soldiers were guarding the district of Oldburg. Deceived by the evil warlock Skulkator, they betrayed the Fighter's Guild and Dragonguard defense plan by opening one of the three great gates to the forces of the Tyrant-God Tialevor, letting the Ashen Inquisitors and their divine leader in.

3 Nightmare Riders (modular)
Even Oldburg's trusty steeds took part in the curse. These mighty horses serve as mounts for the army of the dead.
Skulkator the Lich (modular)
During its life, Skulkator was the powerful warlock of the City-State of Torm. By betraying his people he signed an oath with Tialevor, the Tyrant-God. Now he haunts the ruins of the city as Lich commanding with Harguul an immortal army of Fallen Ones.
Harguul Blade of the Roses (modular)
General of the soldiers of Oldburg, in the great city-state of Torm. His prowess and skill became even greater following his transformation into a Fallen One. (coming with skeletal head or closed helmet).
Harguul on Azekiel (Standalone beast or Saddled version, rider is modular)
Azekiel the demonic, is General Harguul's skeletal warhorse. His hair, generated by cursed evanescent flames, illuminates the gloomy battlefield like the light of the moon.
Eliza (Fantasy Pinup)
The beautiful bride of Harguul the general, even if not taking part in the betrayal of the warlock Skulkator, was partially pierced by the curse of Oldburg, turning her into a walking corpse, half lady and half skeleton.
Oldburg Mausoleum (comes in part with separated door option)
The miasma carried by Skulkator to all of Oldburg even hit the cemetery, condemning even those who rested in the cryptic mausoleums. Approaching these small structures often causes a hungry skeleton to awaken