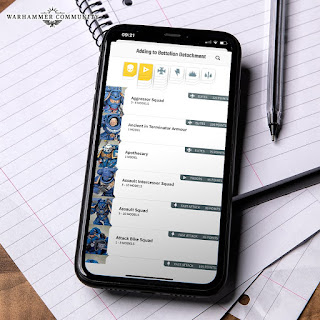 Games Workshop is working hard to get people to its app by offering an extension to the one month free trial they are offering..... "sign up before February 9th." If you already are trying it out, you wont be charged for an additional month either. Not a bad plan.

The App now has the latest FAQ's

Ever since Battle Forge – the official army list builder for Warhammer 40,000 – launched in beta, we’ve been inviting feedback and comments from users around the globe.

All of that input isn’t just a fun exercise in graph-making, though. Your suggestions are shaping the future development of Battle Forge.

We want to ensure that as many of you as possible get the chance to try Battle Forge and Warhammer 40,000: The App – that’s why we’re extending the app’s free trial period. In the meantime, the app team will be hard at work turning your suggestions into awesome improvements.

Speaking of which, the app team has just submitted an updated version for you to try out which includes all of the FAQ content released yesterday, so you’ll have access to all of the most up-to-date information for your armies in the palm of your hand. If you have Warhammer 40,000: The App downloaded already, look out for the update within the next day or so.

If you haven’t yet tried Warhammer 40,000: The App, you can still claim your one month free trial – including access to Battle Forge – when you sign up before the 9th of February. And if you’re already subscribed, you won’t be charged for your next month, either.