A Look at the Warmaster Titan 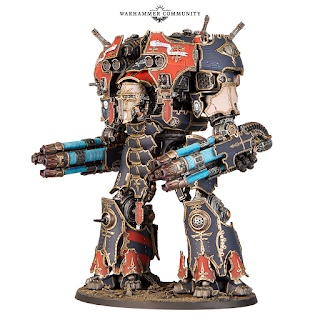 The biggest Titan for Adeptus Titanicus the Warmaster Titan comes with a massive loadout of weapons and has a point costs more than two Warlord Titans.
via WarCom
https://www.warhammer-community.com/2021/01/26/you-thought-the-warlord-was-big-try-the-warmaster-titan/
It’s not just the Warmaster Titan itself that’s bigger – its command terminal is as well! With five different weapons plus an ancillary reactor to choose from (more on that shortly), the Warmaster’s command terminal is twice the size of any other Titan’s. 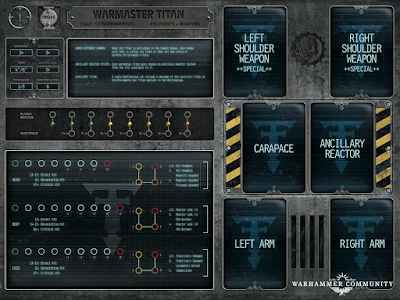 You’ll notice that the Warmaster has expanded damage and critical tracks compared to its fellow god-machines. And you thought a Warlord was durable…
Being able to an extra point of both damage and critical damage on each system makes the Warmaster terrifyingly difficult to take down, especially in conjunction with its seven void shields. Six servitor clades also mean that repairing damage is easier for the Warmaster’s princess.
Of course, you pay for quality, and the Warmaster’s points value is equally formidable, costing more than two Warlords. Between that and the Auxiliary Titan rule, you’ll be using the Warmaster in the very largest of engagements – as befits a Titan of its stature.

Unparalleled firepower
The Warmaster’s primary armaments are its paired suzerain class plasma destructors, devastating upscaled plasma guns that hit like, well, devastating upscaled plasma guns. Three dice at Strength 11 is brutal – and with the weapon traits allowing that to rise to Strength 13 and roll a D10 for damage at short range, little will stay standing after a volley from two of these.
Sure, using those traits will push your reactor to dangerous levels, but remember those servitor clades? There’s a good chance you can vent off that excess energy soon enough. 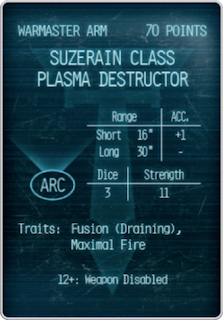 The revelator missile launcher adds long-ranged punch to the Warmaster to ensure it’s making its mark from the game’s first turn. You can also add two shoulder-mounted weapons from a wide variety, allowing you to customise your Warmaster to suit your style of play. Want to ping down enemy void shields with Vulcan mega-bolters? Have at it. Prefer to add more armour-busting might? Melta cannons sound nice. The choice is yours.

Another way to customise your Warmaster is by choosing one of the two ancillary reactor systems. Perhaps you’ll use plasmatic locomotors, which give your behemoth a speed boost at the cost of reducing accuracy when you use movement-based orders. Or maybe you’d prefer a one-time increase to your ability to vent the Warmaster’s reactor (super useful after powering up your plasma destructors) from the Infusive Supercoolant card. 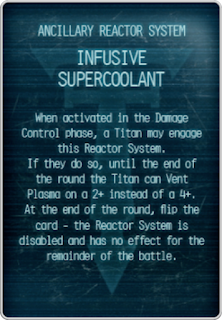 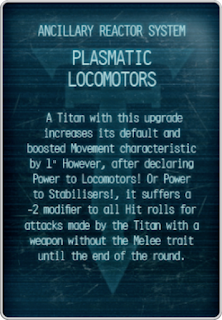