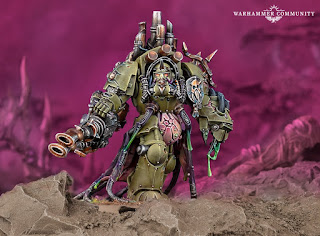 The Lord of Virulence has an aura to help improve Armour Penetration. Here is a quick preview this morning and how you can combine the aura with a stratagem to make it even more effective.

The new Death Guard Codex comes to pre-orders this Saturday.

Clad in ancient Terminator armour and with a vicious twin plague spewer in hand, the Lord of Virulence is a supporting commander par excellence with a host of abilities for improving the Marines they lead into battle. As an expert in artillery and long-range bombardment, the ranged Plague Weapons carried by nearby troops reach new levels of efficiency thanks to the Lord’s Master of Destruction ability.

Combined with Plague Weapons’ ability to re-roll wound rolls of 1, your Core units will have an easier time than ever inflicting a barrage of wounds that bypass the flimsy armour of the Corpse-Emperor’s teeming masses. If dishing out mortal wounds is on the cards, their peerless ability to direct artillery fire allows them to reduce the cost of the Blight Bombardment Stratagem by 1CP. 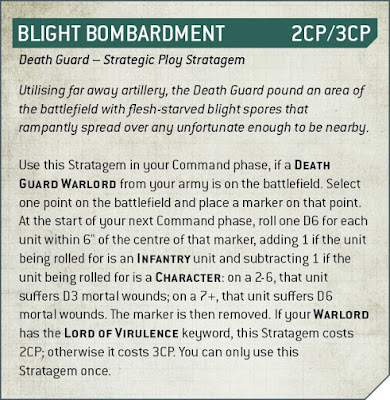