The Genesys Project Update: Moving and Shooting: A Look at Recoil X 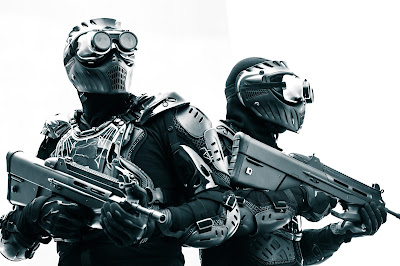 The Genesys Project Open Beta Update: There has been some work done on clearly defining ranged weapons and how far the model shooting it can move. While this was originally going to be a set thing... Heavy Weapons are Heavy Weapons, and Stationary ones are Stationary, there was requests for more detail involved, which again allows for more customization options for your weapons.


As it sits now... (coming in the next update which should be here in about a week).

So what is being tested is a Recoil X trait to Ranged Weapons. This grants a modifier to the weapon that will adjust it making it often easier to fire on the move.... or harder, depending upon whether the recoil is positive or negative.

For example, firing the weapon in automatic mode.... gives a weapon a Recoil 1. Other weapons, like a Direct Energy Beam Rifle has a Recoil -1.

While there are other modifiers that effect a Ranged Weapon, Recoil is a new attribute meant to add more to the game. For example a Giant could pick up a big weapon and use it on the move, where a Goblin would require the same weapon to be stationary.

and don't forget, that there are ways to mount large weapons on smaller vehicles, like Heavy Mounting X, etc. So there is a lot of flexibility in getting the weapon you want onto your vehicles.

If you are new to the Genesys Project, the game is in an open beta, and you can learn more by heading over to http://www.thegenesysproject.com/