Blightwar Box Set is Now Up for Pre-Orders 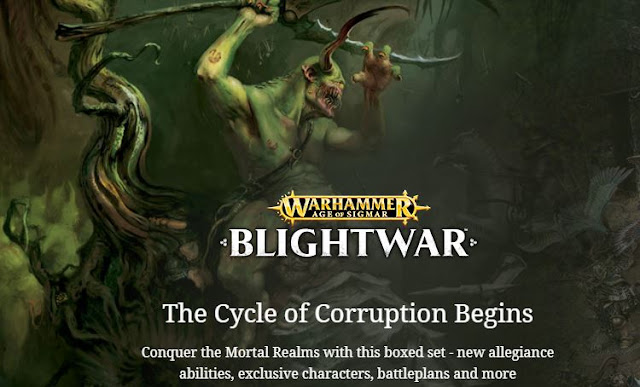 The new box set for the Age of Sigmar is up now, and with it new models for both the Eternal Stormcast and Nurgle. 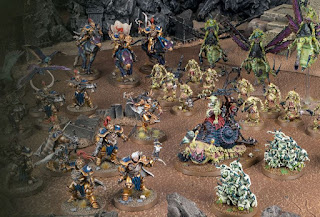 Warhammer Age of Sigmar: Blightwar £95
Blightwar
A 40-page softback book featuring:
- A brief history of the Realmgate Wars and the events leading up to Blightwar;
- An overview of Nurgle, the Chaos God of Pestilence who seeks to take over Ghyran with his own foul garden;
- An overview of the Stormcast Eternals, living weapons who blaze with celestial light as they scour Chaos from the Realms;
- Cycles of War – the Chaos invasion that became known as the War of Life, and the devastating impact of Nurgle’s malign influence;
- The Season of Sowing – details of Nurgle’s numerous unpleasant attempts to dominate, waging war on countless fronts to weaken the resolve of the Stormcast Eternals; no matter how decisively they are held back the chaos continues, and the sowings go on…
- An introduction to Horticulous Slimux and his dreadful mount Mulch – humorless genius and leader of the rotten assault on Ghyran;
- An introduction to Neave Blacktalon, instrument of Sigmar’s will who will accept neither defeat nor death in her zealous pursuit and destruction of Nurgle’s hordes.

Rules
- 3 Battleplans, which you can use to re-create key battles between the Stormcasts and the forces of Nurgle;
- Allegiance Abilities – battle traits that characterise the 2 opposing armies, to be used in games;
- 2 Warscroll Battalions, designed to make use of the entire selection of included miniatures from both armies;
- Warscrolls for every miniature, featuring their rules for use in Warhammer Age of Sigmar;
- Pitched Battle profiles for each unit and Warscroll Battalion, including points values and unit sizes;
- A separate rulesheet containing the core rules for Warhammer Age of Sigmar;
- A Wheel of Corruption, helping to keep track of Nurgle’s Cycles of War abilities in-game.

Miniatures
- 1 x Horticulous Slimux atop his fearsome mount, Mulch. He carries various horticultural tools (using the unpleasant lopping shears as a potent weapon) and prized specimens, and is dangling a Nurgling in front of Mulch to encourage this grumpy beast to move ever forward;
- 1 set of 10 Plaguebearers of Nurgle – these are each armed with plagueswords, and feature the option to assemble a piper and icon bearer;
- 1 set of 3 Nurglings – gruesome yet cheery stacks of creatures, with 27 possible combinations in total;
- 1 set of 3 Plague Drones of Nurgle – these come armed with death’s heads and yet more plagueswords, and feature the option to assemble an icon bearer and bell toller;
- 1 x Neave Blacktalon – a Stormcast Eternals Knight-Zephyros armed with a pair of whirlwind axes and a boltstorm pistol stowed on her belt. She has a choice of heads; one with a helmet, and one bare;
- 1 set of 3 Vanguard-Raptors, who can be armed with your choice of longstrike crossbows or hurricane crossbows;
- 1 set of 3 Aetherwings, large birds of prey aligned with the Vanguard-Raptors who attack on their masters’ command;
- 1 set of 3 Vanguard Palladors – these are armed with your choice of either boltstorm pistol or shock handaxes and strike javelins, and ride furious Gryph-chargers;
- 1 set of 5 Vanguard-Hunters armed with boltstorm pistol and either a shock handaxe or storm sabre, with options for a Hunter-Prime.