Chaos had Brief Moments with a Victory in Sight: The Imperium is winning Nethamus


This was the post yesterday from Warhammer 40,000 Facebook
If you're a Chaos player (or a xenos player looking to bring down the Imperium) get painting, get playing and register your victories now - triumph is in sight! 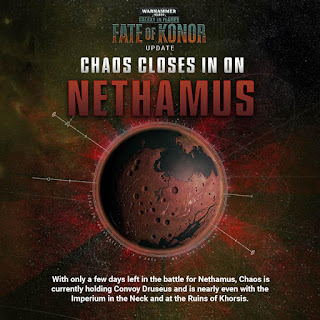 With the new Chaos Space Marine codex I was hoping for a quick turn around. Now that there is less than 2 days left on this, a Chaos victory seems to be slipping away.