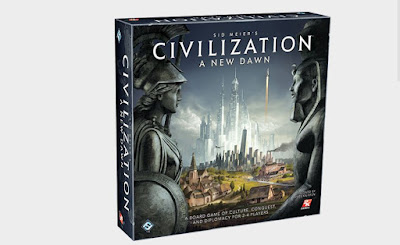 Fantasy Flight has a new game board game coming that follows along with my favorite of all video games, Civilization. This one looks interesting, and one I intend to follow (and most likely pick up), as it looks to take the elements of the video game, and successfully apply the to a board game for multiple players to take hold of.


The game is currently up for pre-order, with a release date sometime in Q4 of this year.
Price for the game is USD 49.95 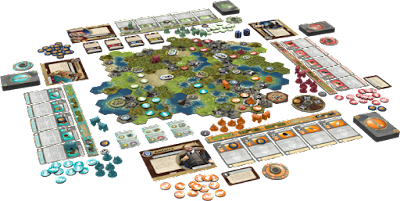 Rewrite History
Sid Meier’s Civilization: A New Dawn is a strategy board game in which two to four players act as the rulers of history’s most memorable empires. Over the course of the game, players will expand their domains, gain new technologies, and build many of humanity’s greatest wonders. In the end, one nation will rise above all others to leave its indelible mark upon history.

This new game presents players with an undiscovered country to conquer, built from beautifully illustrated map tiles. These would-be conquerors construct and populate the map with barbarians, natural resources, and city-states, then formulate their plans for how they will shape this world to their vision. Their exact goals, however, change with each game. Agendas are detailed on victory cards, three of which are drawn during set up. Players race to become the first to accomplish one agenda on each of these victory cards, spreading throughout the world and ensuring their civilization’s place as the greatest world power.

Before players begin their mission to rewrite history, they must each select the leader they will embody for the duration of the game. Players may become the Roman emperor Trajan, the Aztec’s warrior Montezuma, France’s Catherine de Medici, and many more, each with their own unique abilities that help you shape the world along specific ideologies. Once equipped with their leaders’ tools and missions, players are ready to build a nation like none the world has ever seen!

Build Your Empire
Sid Meier’s Civilization: A New Dawn is played over a series of turns that take players from ancient history to the present day. As the wheel of time turns, leaders build their nations from single cities to sprawling empires filled with wonders and technology. As leaders explore the world, their nation can develop and flourish through accomplishments such as scientific advancements, cultural developments, and military production. Each player has a series of five focus cards, one for each area of advancement, that shift as a player takes turns to represent the investment of time. A card resolved in the fifth slot has a greater impact than a card resolved in the first slot, as more time was spent developing that pursuit. Leaders must prioritize and balance their nation’s goals, weighing the value of any given pursuit against the time needed to accomplish it and know when to resolve a card for its maximum effect.

While leaders attempt to raise their civilizations to prominence, they must also confront world events such as barbarian attacks. These roving ravagers can destroy caravans to wreck a nation’s economy, or lay low an unfortified city. Fate favors the well prepared and players may quickly learn that a diversified nation is better equipped to withstand the attacks of outside assailants. If leaders are not prepared for these often unpredictable obstacles, their civilization can crumble into dust and be swept away by the currents of time.

Bold Innovation
A New Dawn stays true to its origins in the Sid Meier’s Civilization video game series by challenging players with tactical decisions for how they plan to take over the world. Do they wish to become the world’s richest nation, harvesting resources and trading with allies? Or perhaps they prefer to rule through military conquest, trampling their rivals into the dust? The areas in which players can gain power and influence are defined with five focus card types: culture lets players expand their territory and claim resources, science allows players to discover new technologies, economy enables players to interact with city-states and rival cities, industry allows players to build cities and world wonders, and military allows players to either reinforce defenses or perform attacks.

While each focus is unique, they are inherently linked. For example, leaders need the resources gained through cultural pursuits in order to build cities and wonders. Meanwhile, an empire needs a strong military to defend cities and caravans from barbarian attacks, therefore safeguarding its economy. Players must strategize and diversify to ensure that their civilization thrives.

But no great empire can withstand the test of time by remaining completely insular. Leaders gain trade tokens by using their economy focus to send caravans to city-states and rival cities, or when the event dial’s pointer moves to the trade icon. Players may then spend trade tokens when resolving focus cards to increase their effects. For culture, a player may spread their influence beyond their borders. A military focus enhancement increases the player’s combat value. An improvement in science advances a player’s tech dial. Enhancing industry increases the player’s production if they are building a wonder. Otherwise, a trade may boost the player’s economy, allowing their caravans sent out to trade to move further. By trading with the outside world, the leaders of Civilization advance their own nation’s goals and achieve more than they ever could alone.

Achieve Greatness
The leaders of Sid Meier’s Civilization: A New Dawn race against one another to prove that they are the greatest nation that has ever existed. Their paths to victory may differ, but their goal is the same: to conquer the world. By achieving goals in their focus areas, players get closer to accomplishing the agendas detailed on the game’s victory cards. Each of the three victory cards is divided into two agendas, giving players six possible missions to choose from. When a player completes an agenda, that player places one of his or her control tokens next to that agenda’s victory card. More than one player may have a control token on any given victory card, but these markers cannot be removed. Even if a leader ceases to satisfy the agenda later in the game, the control token remains and they do not need to complete the agenda again.

Experienced players may also choose to enforce the aptly named "epic game" rule. This offers players a longer gaming experience by including four victory cards in the game instead of three. The rules for victory remain the same: players must complete one agenda on each victory card. The first player who accomplishes this wins and may proudly look upon the civilization they have built, knowing that their people can look forward to a bright and glorious future.

Defy Limits
Build something greater than yourself. Set a new course of history and create a civilization that knows no limits!

Sid Meier’s Civilization: A New Dawn (CIV01) is scheduled to hit shelves in Q4 of 2017. You can head to your local retailer to pre-order your copy today, or you can pre-order from FFG here.
8/15/2017
Natfka
Board Games, Civilization