Necromunda is now official and that odd symbol we have been seeing and trying to figure out from the teaser.... is for Necromunda. Eschers and Goliaths are shown below (my two factions! from ages ago).

via Warhammer Community
https://www.warhammer-community.com/2017/08/13/breaking-news-necromunda-returnsgw-homepage-post-1/
Necromunda Is Back!

It’s been more than a decade since we last visited the Underhive, but very soon you’ll be able to battle it out in the depths of Hive Primus. 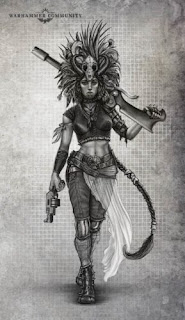 If you’re new to the hobby, you may not be familiar with Necromunda – or perhaps you’ve only heard about it from the fond memories of other hobbyists. Necromunda dives into the underworld of the Imperium, allowing players to control their own Hive Gang – a pack of ruthless criminal killers augmented with black-market cybernetics, gene modifications and scavenged weaponry. Where Warhammer 40,000 puts you at the head of an army, in Necromunda, the scale is much smaller but the action is just as intense – every single Ganger counts. 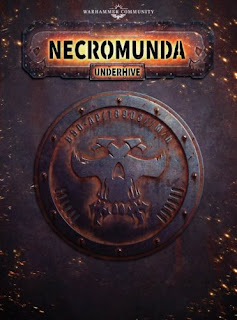 Between intense skirmish battles, your gang will grow from a pack of battle-hungry Juves to a feared and respected syndicate of hardened veterans. To get there, however, you’ll have to battle against your fellow players, each with a gang of their own.

The Underhive is a big place, and the gangs that inhabit it are as diverse as the alien races that inhabit the 41st Millennium. We’re launching Necromunda with two classics.

Gangs from House Escher are fast, deadly, and cruel. While lightly armoured, these cunning warrior women hold their own in melee combat, while at range, they are notorious for their use of armour-melting plasma weaponry.

What makes these miniatures even better is that they’ll be available in multi-part, plastic kits – so easy to assemble, customise and paint into a gang of your own.