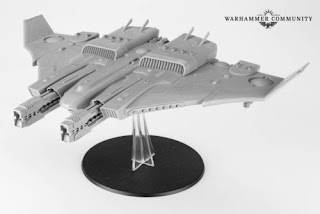 Holy cow, Strength 18 AP-5 and causes 2d6 wounds...... and double damage to Titanic Units. I would be very sad if I had a Titan up against the newly updated Tau Tiger Shark. Its coming back soon....

A classic Forge World Flyer is returning soon with the redesigned and re-armed Tiger Shark AX-1-0. This colossal aircraft is a dedicated Titan-hunter, armed with twin heavy rail cannons capable of scrapping even larger tanks in a single burst; each is Strength 18, with an AP of -5, and causes 2D6 Wounds, with double damage against Titanic units. In short, if you want to give an Imperial Knights player a very, very bad day, this is the Flyer for you. 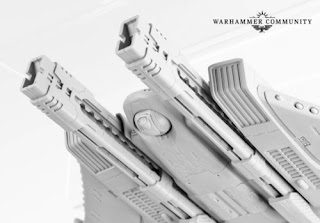 The Tiger Shark has been redesigned much like its smaller cousin, the Barracuda AX-5-2, with a sleeker appearance and extra detail. There are also some new weapon options coming to represent the Tiger Shark Fighter-Bomber – a pair of heavy burst cannons or ion cannons.