Typhus? Hidden in the Shadows, and a new Model Mentioned on Twitch

There is a lot of talk about a new Typhus from the Mortarion reveal video. Typhus is not one of the main models in the center of the video, but apparently is captured in part.

Here is all the latest news.

From Warhammer TV (live Twitch game)
https://www.twitch.tv/videos/166178286
Warhammer 40,000: World Eaters vs Drukhari
The conversation comes to the new Mortarion model, and one of the people in chat.. Kallidius is concerned when its said Typhus is not getting a new model


Also if you back up a little on that video, it seem that Mortarion has two heads.... he mentions that the head fell off when he picked it up (they don't glue them on if there are multiples so they can take pictures of both)

from War of Sigmar

pic below from Bolter and Chainsword 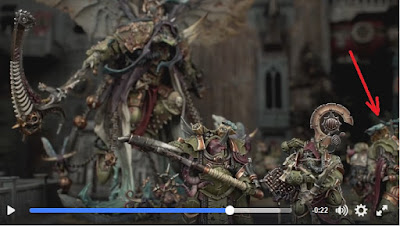