Chaos from the Generals Handbook 2017 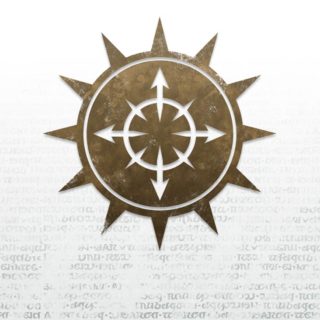 With the new pre-orders going live tomorrow, there is a preview of Chaos up now, from Skaven to Slaanesh, there are some interesting things here.


As for the Hosts of Slaanesh … well, you wait a year for an allegiance ability, and three show up at once! In the Age of Sigmar, Slaanesh is missing, but his influence is still felt everywhere, and his followers are divided into three camps; the Pretenders, who aim to replace Slaanesh with their chosen champion, the Seekers, who hunt across the realms for their missing god, and the invaders, who carry on as if Slaanesh was still alive and raid and worship him through spreading fear and chaos throughout the realms. In the game, you can pick which one of the Hosts your army is from:

This gives Slaaneshi players a huge number of options when building their armies. If you like heroes, bring an Invaders host and benefit from the powerful Command Abilities of a Keeper of Secrets, Lord of Slaanesh on Daemonic Mount and a Chaos Lord of Slaanesh – perhaps using the first two to provide offensive bonuses to your units and the third to keep up Inspiring Presence on a valuable unit. If you’d rather run your hero solo, a Keeper of Secrets in a Pretenders Warhost with both Supremely Vain and Allure of Slaanesh is a terrifying prospect in close combat.

As well as the Hosts’ abilities, Slaanesh armies can now take Hellstriders of Slaanesh and Seeker Chariots of Slaanesh as Battleline units; expect Slaaneshi armies to be fast, versatile and hard hitting on the tabletop.
Two Skaven Clans are also gaining new alleigance abilities. The first of these are the Clans Pestilens, who reward swarms of infantry backed up by Plague Priests. Strength in Numbers doubles the bravery bonus units receive for every 10 models, which combines effectively with the new Massive Regiments rules for Plague Monks – you’ll want to take at least one 40-strong unit as your Battleline. The Clans Pestilens also reward players who bring a lot of priests with deadly Great Plagues:

These powerful and unpredictable effects can allow a Pestilens army to swing the game in their favour; the Redmaw Plague in particular means that any powerful combat heroes will be wary of approaching your Plague Priests, lest they turn on their own men! If you’re looking to maximise the use of Prayers, the Liber Bubonicus allows you to transform a Verminlord Corruptor into another Priest. Meanwhile, Blistrevous, the Living Cyst is a disgustingly entertaining artefact that leaps from hero to hero.

The Clans Skyre, on the other hand, are an army quite unlike any other in Warhammer Age of Sigmar. Like the Clans Pestilens, Strength in Numbers will allow you to benefit from massed infantry, but the real strength of Skyre armies lies in their Heroes, Skyre Weapon Teams and War Machines.
Firstly, there’s a new resource called Warpstone Sparks. This can be used for various purposes, from making sure a spell is cast successfully to doubling the damage of a key attack; get lucky and a successful attack from an Arch-Warlock’s Piston Claw could kill a rival character in a single blow with 6(!) damage.  If you want to make use of war machines, a Warlock Engineer with Deranged Inventor accompanying a group of Doomwheels is a deadly combination that’ll bulldoze through most opposition with stacks of rerollable attacks:

There’s also the return of a notorious Artefact from the World That Was – the Brass Orb. While it’s not tremendously reliable, it’s worth taking for the prospect of removing Nagash from the table with a Warlock Engineer!

If you’re a fan of old-school Chaos armies, the Slaves to Darkness are for you. These guys are great in the new General’s Handbook, benefitting enormously from allies from any Chaos God thanks to their choice of Chaos Marks – Khorne-marked Slaves to Darkness units, for example, benefit from the presence of a nearby Slaughterpriest. Meanwhile, the Eye of the Gods allegiance ability can transform any Chaos Hero in your Slaves to Darkness into a powerful Daemon Prince with a lucky roll – or, if you’re unlucky, a gibbering Chaos Spawn:

Finally, Brayherds are getting some powerful new bonuses – Warhammer Community writer – and Brayherds enthusiast – Rhuairidh was so excited that he insisted on giving them a whole article to themselves next week.
The allies system means that even those Chaos factions that lack their own Allegiance Abilities are stronger than before, while Monsters of Chaos and Chaos Gargants can be used in a wider range of armies. The recently revealed Bloodfeast Gorgers box – containing a Ghorgon and some Bullgors – is an example of the powerful allies that can be slotted into Chaos armies. Similarly, if you’re a Chaos player, you won’t want to miss the chance to add a deadly Mutalith Vortex Beast to your forces, while Skaven armies will want to invest in powerful Masterclan units like the Grey Seer, Lord Skreech Verminkin and the Screaming Bell. One small but significant benefit of the allies system is that many Chaos armies finally have access to some much-needed ranged support, with most factions able to take a contingent of Ungor Raiders .