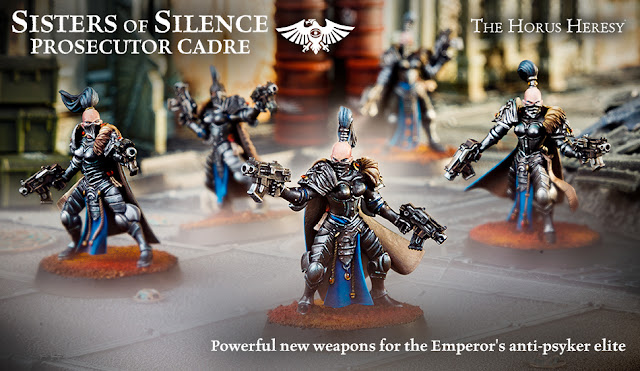 New models from Forgeworld are up for pre-order now for both the Legion Custodes and the Sisters of Silence. 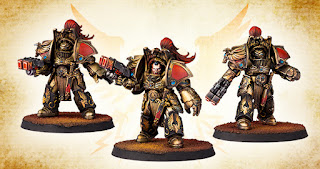 This multi-part resin kit contains the components necessary to assemble three Legio Custodes Aquilon Terminators. Noticeably more complex-looking than standard Tactical Dreadnought armour, with additional integrated power systems and capacitors adding detail to the model. Each Terminator is armed with a solerite power gauntlet, with an option of adrathic destructor or lastrum storm bolter in the other hand. Three different helmets are included, with one bare head option. The breastplates, pauldrons and top plates are detailed with Imperial iconography, and there are three plumes, made up of two different designs.

This resin kit comes as 43 components, and is supplied with three 50mm round bases. Rules for the Legio Custodes Aquilon Terminators are available in The Horus Heresy Book Seven - Inferno. 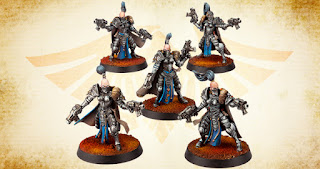 Sisters of Silence Prosecutor Cadre £37
Description
The core of the Silent Sisterhood are its Prosecutors, mercilessly effective both in attack and defence. With this bundle you’ll be able to upgrade a 5-model Prosecutor Squad to represent a Prosecutor Cadre. You’ll receive:

- A Prosecutor Squad – this multi-part plastic kit contains the parts necessary to assemble a 5-model Prosecutor Squad, Silent Sisterhood warriors who specialise in longer-range combat with their powerful Umbra-pattern bolters. One model can be assembled as a Sister Superior, with her own loincloth, shoulder pad, seal and choice of 2 heads.

Supplied with 5 32mm round bases and a Burning of Prospero transfer sheet.