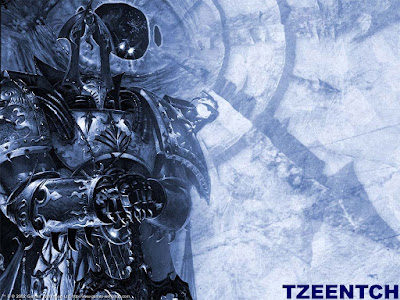 New Chaos Codices Coming according to the latest rumors. Of course these are still rumors, but I would love to see the Chaos Gods get their due with new books.


As with any rumor, please add the required salt.

via Andross on Dakka
Part 1
Right so at the end of my thread regarding the Infernal Tetrad. I got into a bit of gossip mongering about some up coming Chaos Space Marine and Daemon products.

So this what I know as true. As much as can be expected of an early rumer.

A good friend of mine who works in my local GW store, has let me in on some information. Now he's told me things that are "coming soon" before and he's always been proved right before. So I personally believe what he's told me.

Things he says are coming soon. a new daemonkin style Codex: for the three remaining Chaos powers, A new set of Chaos data cards comprising of the tacticle objective cards (originaly available with with the special edition version of Traitor's Hate) and new Pykic Power cards for Tzeentch, Nurgle and Slaanesh, with seven powers for each and conversion kits for the Chaos Powers like those for Blood Angels, Space Wolves etc with 10 shoulder pads champion heads weapons. So yeh if he's done his clearvoyant trick I'll be very very busy through next year. If he gets anything else he lets me in on I'll be sure to share.

Part 2
Not a single crossover Codex: for all three one whole book for each of them.

The Data Cards are the only thing he said had stuff for all three in, the faction spesific psykic powers.

The only thing I don't get is how the updated psykic powers will play into the new Codex:s.

Point. If we're getting new powers there will need to be a printed version of them. Not everyone will be able to afford or want the the cards they're a nice touch and I always get them for any factions I own, but they are for everyone.

Now l lets take what I've heard to be true. If we're getting three new Codex:s it stands to reason that each discipline will be in the appropriate faction Codex:. But I know some people who flat out dislike the Daemonkin thing. should they have to buy three Codex:s they don't really want just so they can have the updated psykic powers for an army and Codex: they already own?

And Azreal13, when I said a daemonkin style Codex: I meant a Codex: each for each chaos power, that do for each of them, what Khorne Daemonkin does for Khorne unit's, but won't necessarily have "Daemonkin" in the title,

And on the subject of scepticism. Any man who is not sceptical about another man's rumour is a fool. Any man who endorses said rumour whithout evidence is a fool among fools.

I am sceptical about everything. The reason that I'm fairly confindent of these rumours is the guy that told me has tipped me off on things before. and everything he's told me about I now own. Like I said in my thread on the Infernal Tetrad "Sorcererof Khorne". His early info has always proved to be correct. I just hope they get the Data Cards before Christmas as I'll need them for the legion Codex: I'm wrighting.

Part 3
Right. as I understand it he means. A Codex: for Tzeentch, a Codex: for Nurgle and a Codex: for Slaanesh with new rules, wargear, formations, etc. For armies built around both mortals and daemons dedicated to the aforementioned power/faction. But they probably won't have "Daemonkin" in title.

Yeh I'm pretty sure we'll be getting more campaign books to represent the activities of Abaddon's 13th black crusade. a lot more.