Developers Talk about the Burning of Prospero

The Burning of Prospero Box game is up for pre-orders now on the Games Workshop sites. (youll have to wait a little bit if like me, you live in the US.) The Developers have a new video out for the game, where you can check out the models, the game and more.

The Horus Heresy: Burning of Prospero £95 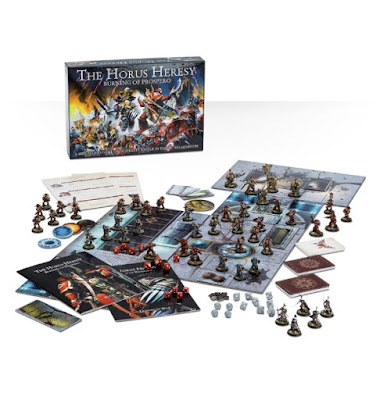 via Games Workshop
Description
The Story
On Prospero, the psykers of the Thousand Sons face the ultimate censure for their forbidden studies. The Primarch Leman Russ is sent to punish them by any means necessary – at his command, fire rains from the skies as his Space Wolves fleet bombards Prospero over and over, reducing the world of the Thousand Sons to ash. Tizca, city of glass pyramids and golden hopes, is protected from the fires by a vast force field of telekinetic power. So it is that the Space Wolves bring the Sisters of Silence, anti-psykers anathema to all who channel the Warp, and the Custodian Guard, shining heroes who are the elite blades of the Emperor himself to Prospero, there to attempt the riddance of the Thousand Sons forever.

The Game
The Horus Heresy: Burning of Prospero is a game of running battles set in a city torn apart by a fiery cataclysm, featuring six scenarios designed to stretch the strategic nous of two players. One player controls the Space Marines of the Thousand Sons, reality-twisting psychic superhumans, and one controls the Space Wolves, Sisters of Silence and Custodian Guard. It’s a fast-paced game full of strategic decisions, with the strengths and weaknesses of both sides meaning tactics and foresight are just as important as lucky dice rolls.

The Contents
Inside The Horus Heresy: Burning of Prospero, you’ll find:

These can be assembled as Vigilators, who specialise in melee and carry executioner greatswords, Prosecutors, who operate more flexibly and carry bolters for longer-range combat and Witchseekers, who carry flamers for devastating multi-target assaults.

The Squad includes 8 heads, and a further 2 head options for the Sister Superior.
-        30 Legion Veteran Tactical Space Marines in MkIII ‘Iron’ Power Armour – these are split into a 10-man Loyalist force and a 20-man Traitor force.