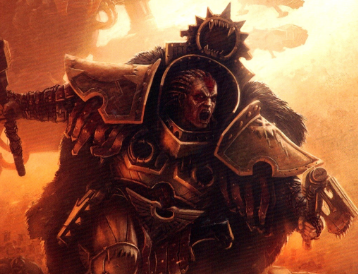 With the sightings of the Daemonic Primarch, his reveal by Games Workshop, the big question is what exactly is going on. Luckily for us, we have someone willing to share some details and answer a few of the questions we have all been wanting to know.... After Magnus and Thousand Sons.... What is going to happen?


Here is a couple bits from Squiggly who has been nice enough again to chime and help us out.


via Squiggly on Faeit 212
To quote myself;
"The Cults will be expanded to the point they can form their own mini codexes with the Traitor Primarchs at their head"

Nick Wenker:
Visit Nick Wenker's profile
What is a mini codex? Each of the Cults appears mixed into a Campaign Supplement?
Squiggly
Think Genestealer Cultists/Harlequins/Deathwatch.
A codex built around a few unique things, and then filled out with more generic stuff to make it a full codex.


Runefyre:
Fulgrim has been strangely absent from all the primarch rumors:(
Squiggly
He'll be the last of the Cult Primarchs to get done.
Either Angron/Mortation are the next Daemon Primarchs to get released. I'm not 100% on the order though. I heard about Angron first, but that doesn't mean alot