Other Primarchs Not Coming Soon, and War in the Webway! 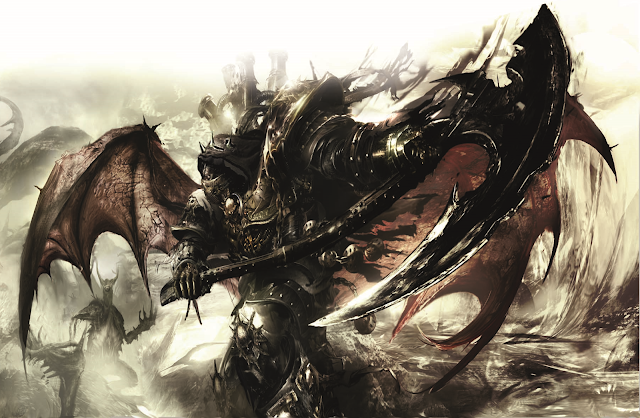 Additional information from around the Faeit 212 site on Primarchs, the image from Games Workshop and more.

via Michael Tite
You mean to say you can't imagine Typhus and Mortarion and huge Blight Knight sized Grave Warden type heavy Terminators with Underslung launchers and Manreapers?
And new Plague Marines?
And all sorts of Plaguey goodness?

Well.. I don't know what to tell you.. except.. SoonTM


Q:Yeah strangely everone forgets about one and only fully healed loyal primarch still sleeping in the Rock. Coincidence ?

No.. no cooncidence. He's back soon. As is Russ.. and Khan and a few others.. one of them is mysteriously healing in stasis.. Weird how this is all coming together.. there might even be one or two we believed dead making a return in one form or another.. who knows eh? ;)

Q: Regarding the hand covering something up in the image
His hand is strategically placed over something that you aren't supposed to see yet..

You'll also notice another character in there, if you can see ;)

via Squiggly on Faeit 212
I could well be wrong with this, but I don't think that artwork is from the Fenris book. Rather it's from the following "Black Crusade" book.
Who's ready for a War in the Webway?
It's also worth noting that any further Primarchs will be a way off. Expect the "2" within the next year, but the others aren't coming any time soon.