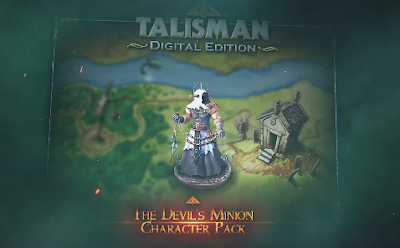 Something fun today as we get closer to Halloween. I just realized when I saw this press release that Halloween was less than a week away! Fun.


Note that this is not for the Horus Heresy expansion which is also available now and can be found here
http://nomadgames.co.uk/talismanheresy/

OCTOBER 25 2016, Cheshire, England - Nomad Games is getting into the All Hallow’s Eve spirit when it comes to Talisman: Digital Edition, with a Halloween bundle at a hauntingly discounted price!

As you battle for the Crown of Command be wary of the dead that rise from their graves, vampires that hunt for unwary prey and witches engaging in nocturnal rituals. Beware the Grim Reaper as he wanders the land and the horrifying werewolf that prowls the night.  Dare you venture into the night?
The Halloween Bundle includes the base game, the Blood Moon expansion, the Dungeon expansion, the Reaper expansion as well as three character packs - the Exorcist, the Devil’s Minion, and the Black Witch! But beware the bewitching hour, this bundle is only available for a limited time!

If you’ve been waiting for the perfect chance to get in on the Talisman craze, this is your chance!