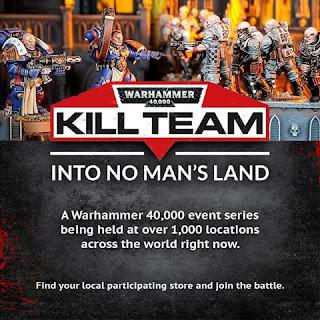 Games Workshop today announced a campaign event in retail stores around the world for Kill Team called "Into No Man's Land".

via Warhammer 40,000 Facebook
https://www.facebook.com/Warhammer-40000-1575682476085719
Right now, hundreds of independent retail stores across the world are running Kill Team games as part of the Into No Man's Land event series. This is a great way to get involved in the Warhammer 40,000 community in your local area, as you only need a single squad or a handful of models to take part.