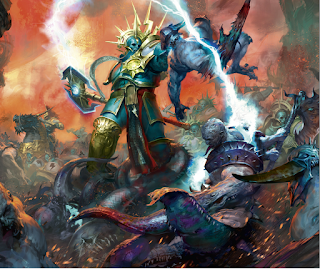 Additional details and updates let us know that there is a Stormcast Eternal release and something Khorne coming in March for the Age of Sigmar. It seems Orcs are more of a end of the month/ April release.


Im also wondering if we are going to see a second book for the Fenris Warzone. There is a lot of room to continue this story, and I was hoping that we would see more on it in March.

via Squiggly on Faeit 212
I didn't think Orruks were that early. I thought it wad Sigmarines, then Orruks, then Heresy

via Darnok on Warseer
Eh, just got word that my first batch of O & G information was off a month. Sorry everybody, it will be April, not March. It seems like some Skaven repacks, more Stormcasts and something Khorne is coming during March.

via Lady Atia on War of Sigmar
"Just to clear things up - there won't be just reboxes 'till Orruks kick off ... but filler for the AoS starterset armies and there should be the re-release of the broodlord soonish afaik." Atia

Sad Panda on Dakka
There should be a significant Stormcast-release sometime soon.


Previously On Faeit 212
via Lady Atia on War of Sigmar
Book, Big kit, some smaller kits and clampacks
"army release size, so similar to fyreslayers one. big kit and a few smaller ones and clampacks + bookS"

Darnok on Warseer
From what I've been told about Marchs O&G releases, we'll see a big monster, an infantry unit, a cavalry unit, and several clampack characters. Plus the obvious book of course.

via Mikhael on Faeit 212
We will see new Kits in March. It's not a Book only release.

Orcs and Goblins / Destruction in March are the next release for Age of Sigmar.

It's a Orcs / Orruk only release.
The Orruk / Destruction release will Start in late March and last into April.
Orruks are a three weeks release

Before this we will see some repacks for the AoS Chaos fraction.
2/29/2016
Natfka
Age of Sigmar, Games Workshop, Gaming News, News Headlines, Rumors, Stormcast Eternals