Talisman: Horus Heresy Taking a Look at it. 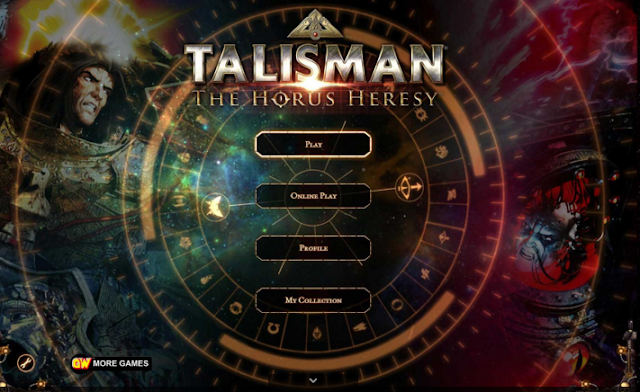 I had a chance to play Talisman: Horus Heresy over the last week. Not only that, but I was able to log in with a couple friends as well. The game is just about to go live on steam, so the beta I was running I expected to be a little rough, but not so. The game really is very beautiful with good graphics. Since it plays like a board game, quite literally, I had a good time exploring the game to get a feel for it.


It's important to note though that I have not played the board game versions of Talisman. It's always been one of those games on the list to pick up for my collection of games, but never was pressing.

In Talisman you roll a dice, choose the direction of your Hero or Villian, and move them across the board. Eventually moving towards the center of the board, where things get a more difficult. I spent most of my time of course playing villains, which is half the fun in my book. Characters to choose from are many, including Roboute Guilliman, Corvus Corax, Vulkan, Angron, Konrad Curze, Mortarion, and many more.

For true fans of the Talisman series, this game feels like a board game, with the exception of being able to add AI opponents. The game is definitely the most fun with friends, even though you can play with others online. I highly suggest playing with friends on a mic, and filling the extra slots with ai opponents.

Overall.... a good game for board game lovers, especially fans of the Talisman series. There are plenty of fun encounters, and the graphics are really good. If your not familiar with Talisman, the game gives you all the information you need as you play, and gameplay is smooth.

The game is available now for pre-order on steam
http://store.steampowered.com/app/358460/

Additional review and comments via Threadmiser
The game feels pretty solid, some commanders are a little screwed (Angron can get hosed on certain quests) but overall choice doesn't matter much. The game only really works with at least 4 players, but ai buddies can help, more is better.

Biggest nitpick I have is I'm not sure how often I'd play this: the board game gets a lot of replay value from physically hanging out with friends but with this it's missing that community experience of being in the same room. The game feels a bit same-y after 15 ish runs (might be I've overdone it a bit) but I'd like to see more events to spice thing sup at least. I know it's the beta but after about 5 runs you've run through about 90% of the cards.