Genecults and Deathwatch to appear in a Stand-alone Game. Rumors and Hints 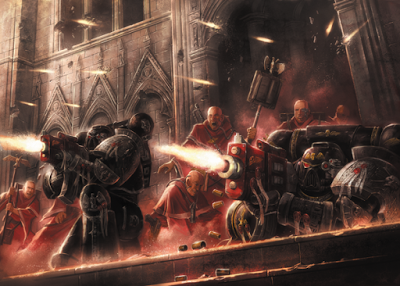 There are a lot of speculations and some credible rumors that we have had going on regarding a Stand alone game for Deathwatch and Genestealer Cults. To cut through all the wild speculations that have gone on for quite some time, I compiled the most reliable of the rumors here.


Of course there was one other that I was searching for, but couldn't quite recall where it was. Regardless, the new box game is likely coming out for pre-orders next week.

A couple of additional hints..... Last chance to buy revealed the broodlord model, which is thought to be replaced by the model in the stand alone game. Also following in the footsteps of Execution Force and Betrayal at Calth, a stand alone game is quite in the realm of possibilities.


Next Week's Hints from White Dwarf: Black and Silver
Deathwatch vs Genestealer Board Game!!!!! .... Seems likely.


Recently
via Squiggly on Faeit 212
Lictors, warriors nah....
Patriarch, hybrids and a re-release of the Deathstorm Broodlord. Hell yeah!

Jan is AoS, no 40k til Feb 2016. The only Tyranid release of the near future is the Deathwatch vs GC game which will be released Q1 2016.

Some time ago
via 75hastings69 on Warseer
G/S Cult Codex & Models (Harlequin sized release)
Deathwatch Codex & Models (Harlequin sized release)
..... well, I may have gotten myself a bit confused about what these actually were, it seems we "may" be seeing these two as a combined set in some fashion, whether that's as another standalone game or as a "starter/campaign" set is yet unclear, although I'm going to assume that these would be unusual choices for a starter box.


What's left to discover between now and next week!- The name of the game, a solid source coming forward with some contents, and of course leaks that could come out later this week or weekend.
2/15/2016
Natfka
40k, 7th Edition, News Headlines, Rumors, Warhammer 40k