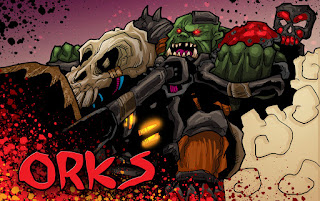 Hey everyone, Reecius here from Frontline Gaming to discuss the new Ork Great WAAAGH!-Band detachment after having played it. Be sure to check out our Tactics Corner for more great articles!


The Orks got some love from GW in the updated WAAGH! Ghazghkull supplement. In addition to some new formations, they got a brand spankin new "Decurion" style detachment. These are all the rage in 7th ed, and I must admit, I am a big fan of them as in general, they provide an effective and characterful way to play a factoin. So, when I saw that the Orks got one I was pretty pumped as my Greenskins are certainly one of my favorite armies to play and they definitely need all the help they can get! And caveat, this was our first play through so please forgive any rules gaffs.

Some Decurion style detachments are amazingly good, good to the point where you rarely see their corresponding army played any other way such as with the namesake Necron Decurion. Others though, are not so hot such as the unfortunately bloated Astra Militarum Cadian Battle Group, and are rarely ever seen.

Where does the Ork version fall in that spectrum? At first glance I got really excited for this. Their command benefit is the ability to call a WAAGH every turn, including the first! Wow, that is great! It makes Orks incredibly fast which is awesome, and with transports, if your opponent deploys poorly, you can snag a first turn charge or two. While that will only happen rarely and almost never twice with the same opponent, it is quite good. Better though, is how reliable it makes Orks at getting into the thick of things when they want to. For an assault army of largely very fragile models, that is really useful. 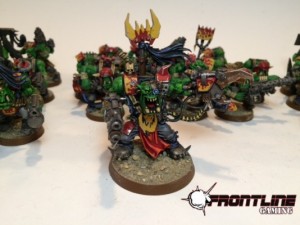 However, morale is the real Achilles' Heel of the Ork army. Mob Rule hurts as much as it helps and what keeps the poor Orks from being truly competitive is their proclivity for failing morale checks at the wrong time.

The solution to this presented itself in the Great WAAGH!-Band with the possibility of getting Ghaz in there and making him the Warlord which grants the army Fearless when he calls his WAAGH! Amazing, right?! You bet...but there's a catch. To get Ghaz, you have to the the Council of WAAGH! formation (unless I have missed a way to get him, otherwise which if so, please correct my mistake in the comments section!) as a command section, which is a REALLY expensive formation. 600pts with no upgrades at all, and it dictates how you play Ghaz as he must be in that unit and cannot leave. So, you're stuck with a psuedo Deathstar, even if you don't like playing that way, and an expensive one, too. With just some basic upgrades and a mandatory transport vehicle, you're looking at an 800pt investment. Ouch. Luckily though, you can take a Battlewagon as the mandatory Auxiliary section to complete the detachment, which helps a bit.

Add to this the pricey Core choices and your army has no room for anything else in it. So, if you want to go this route, your army pretty much writes itself, as you have no room for much customization in an army at 1850pts or less.

All that said, it does give you a fun army. I love running Speed Freak style Trukk Boyz and you can certainly do that in this army. Here's the list that I took:

My opponent played a very solid White Scars Battle Company (are there any other Chapters out there this edition?! lol). Tons of transports, ObSec (which the Ork list lacks, unfortunately), multiple turns of rerolls to hit, mobility and firepower. Oh yeah, and army wide Hit and Run...brutal! Now those are some serious detachment benefits, haha. 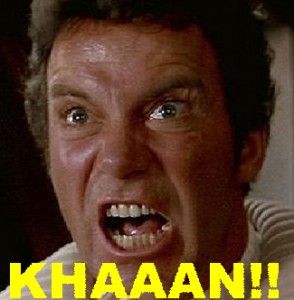 I got first turn and set up on the line, going hell-bent for leather! My opponent also deployed aggressively, looking to possibly seize on me and ensure that his Grav weapons were in range to strike as my potential assault range was actually greater than his shooting range! He wisely deployed his Scouts in a line at midfield to gum up my plans for first turn charges.

The game was brutal, right from the start! I managed to shoot the gaps between some Scouts and get into melee top of turn 1 with some Boyz, popping transports and taking out a number of units. Battle Company struck back though and those twin linked Bolters were MURDER on the poor Orks. I lost more than half my Boyz bottom of turn 1! lol.

The game was just savage thereafter, with both armies creaming each other. I have to say, being Fearless every turn was absolutely game changing for the Orks. Exploding Trukks causing pin checks, avoiding Mob Rule, not getting run down in melee, etc. all helped tremendously to keep my Boyz in the fight. Being able to run and charge every turn also made my Boyz lethal to a huge chunk of the table. 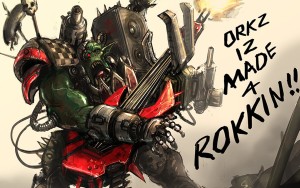 While I would prefer not to take Ghaz in a big unit of characters as you do in the Council of WAAGH, I must say, they hit like a brick shit-house. They walked through unit after MSU Marine unit and collapsed a Space Marine flank almost by themselves. They barely survived the fight, but I must say that that is a powerful unit (as it should be for the points) but, wouldn't cut the mustard against a true deathstar. While Ghaz goes 2++ for pretty much the entire game (only being vulnerable top of turn 1 if you go second as he hasn't called WAAAGH! yet), he doesn't serve as the super tank we'd all love him to be as he must issue and accept any challenges. And I mean he, Ghaz, must do so; no throwing in a Nob to take his place. Le Sigh. What this means is a smart player challenges Ghaz out of the way with a chump character, and then murders the rest of the Boyz in the unit who are sadly invulnerable save lacking.

In this game though, they wrecked face. Even cheapo Warbosses with just a Big Choppa are no joke, and can do a lot of damage. Against opponents who lack an uber melee unit, you will do just fine with these lads and in most games, I would bet they are the MVP.

As the game wound down, the problem of Battle Company having just too many ObSec units reared its ugly head and my opponent got me in the end. However, it was very close and had it gone one more round, all I had to do was take out an Attack Bike to likely win! Orks vs. White Scars Battle Company is a rough game, one I really struggle with and this felt like an uphill battle, but a winnable one. That is cool, and really helps out the Poor Orks who often feel like they only have one or two good builds.

The downside to this army though, is that it struggles with armor. You have pretty much no ranged weapons to crack transports. While Klaws certainly do the trick, you have to get out of your Trukks to use them (I miss you old Boarding Planks and Deff Rollas!). That means that while yes, you do pop the tank in most cases, you then get shot to ribbons right after! Tankbustas are the gem of the Ork dex and if you could sub them in for some of the units of Boyz in the core formation, you'd have yourself a stew, baby!

The other issue is things like Wraithknights and Imperial Knights. A single Nob in a unit of Boyz isn't going to get it done and Ghaz' unit can only be in so many places at once. Again, Tankbusta Boyz are the answer here as they wreck MCs and Vehicles, but, you simply can't fit them in the detachment as the Core and Ghaz eat up all the points. If you had old style Deff Rollas you'd be able to handle a lot of these things, but alas, you do not.

If you had access to Ghaz in a detachment other than the Council of WAAGH!, as an upgrade to the Warboss in the Core formation, or just by himself as a command choice, it would make all the difference in the world (and again, if you can and I missed it, please don't be shy about sharing your knowledge!). You'd then have the points for a few other choices (Tankbustas!) to really round the army out and give it the tools it needs.

The fact that the core choice has pretty much the exact same benefits as the Decurion is pretty disappointing. I think GW missed an opportunity to bump this Decurion just a little further into the realm of really competitive that it needed. WS5 on the Boyz for example, would have been incredible, or free Trukks, to get just that one or two extra units the list needs (Tankbustas!!) to make it well rounded.

As is, it is certainly good and certainly MUCH better than running Trukk Boyz in a CAD. While ObSec is awesome, WAAGH! every turn and Fearless are simply amazing for Orks. And while it may fall shy of top tier, or most efficient Ork build status, it is not at all bad. I feel that you could take that army out against most opponents and have not only a very good chance of victory, but a super fun game, too! This list will absolutely rock some armies, too, as the crazy speed and Fearlessness will simply be more than some lists will be able to handle.

Everyone loves playing Orks, and as stuff is blowing up and going nuts all over the table, it makes for a super fun game. You get the tools you need to be a real threat, but fall just short in a few too many categories to be a real heavyweight contender. For my money, I will certainly continue to experiment with it, but, when taking my Boyz to a tournament, it will still be Bikers and Tankbustas for me!

How are all of you enjoying the Great WAAGH!-Band detachment?
2/25/2016
Unknown