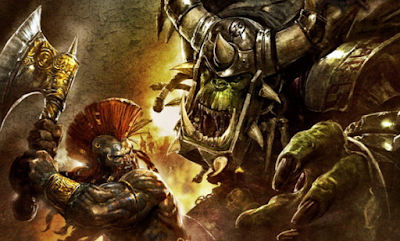 Next week is expected more Deathwatch Overkill in the next White Dwarf, as we have already seen the leaked 40k rules for the Genestealer Cults. However, the week after, its all up for grabs, as we don't know if 40k will be up next, of if the Age of Sigmar will take over.


My bets are on the Age of Sigmar new Grand Alliance Book with new Orks and Goblins. New Wyvern coming as well? that is what is what I think we will see. (my own speculation based on what we have heard.)

Here is the latest reliable whispers we have heard across the web.


via Lady Atia on War of Sigmar
Book, Big kit, some smaller kits and clampacks

"army release size, so similar to fyreslayers one. big kit and a few smaller ones and clampacks + bookS"


Darnok on Warseer
From what I've been told about Marchs O&G releases, we'll see a big monster, an infantry unit, a cavalry unit, and several clampack characters. Plus the obvious book of course.


Orcs and Goblins / Destruction in March are the next release for Age of Sigmar.