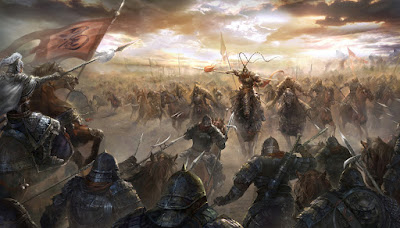 One item that is currently being wrapped up is Mounted Combat. This type of combat is of course either from a Horse or similar mount during the early ages of Genesys, and up to motor or hover bikes for future ages. What is considered standard for games, an increase to toughness is just not enough here, and recent testing is bringing just what mounted combat means to the game.

Movement and Charging Through or Past opponents.
Being mounted in Genesys obviously grants a lot of extra movement which can give some very nice charging bonuses to the strength of your attack. It also provides drive-by attacks, or charging through an opponent if there is room to. This goes down to the mounted rider attacking during it's movement. Some larger mounts can even charge through models, literally running them over during the charge.

What this means in game terms is that your charging rider, does not just charge up to base to base with a model and stop dead in their tracks to fight in melee combat. They can of course, but often cinematically the mounted riders often attack and continue past, where they can then turn around and charge again.

Tougher on a Mount?
Does adding a mount to a warrior make him tougher to survive hits? In Genesys getting up on a mount is not make you superman tough, but instead adds to your Martial Target Number making you harder to hit in Melee Combat as both combatants are not on even footing.

Fighting Back
Being charged looks like a tough situation, and it can be. However, you have do have various options, that can either counter, or ignore the bonuses that a mounted rider gets.

Pistols. Yes, they can be used in melee combat. Since you are then shooting instead of using a melee attack, you use a ranged target number instead, quite possibly shooting the rider off his mount.

Hooked Weapons. There are many weapons during that can get bonuses against riders, essentially reducing or negating their bonus. Historically there were many of these weapon types, like various polearms.

Killing or destroying the Mount. Yes. That rider just too tough to kill. Point your pikes at the charging mounts. The rider will most likely survive, but he is no longer mounted! Of course this may be easier said than done.

Additional Playtesters.
Not quite yet. We will be getting to more of this soon. There is active editing going on of the rules, additional in-house and outside groups testing various things. At no time is this project stagnating, and I hope to bring in a couple additional groups for testing very soon. I don't want to get dates on this yet, but as soon as I have them you will know.
2/17/2016
Natfka
The Genesys Project