Home » Board Games » Games Workshop » New Releases » News Headlines » Deathwatch: Overkill Reports are Coming In. A Look at the Game

Deathwatch: Overkill Reports are Coming In. A Look at the Game 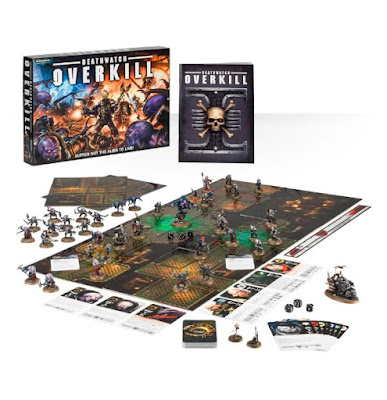 The board game costs $165 USD, and with it comes over 50 models of Deathwatch and Genestealer Cults. This alone seems like a good deal, but really..... how is the game? After all I am a board gamer as well... and I want to know if I am going to actually want to play it.


So here is a review and a look at the game from Mauler.

via Mauler from the comment sections on Faeit 212 (thank you)
Had a 30 minute bash at this earlier today in a local GW, I hadn't bothered to watch the the official video so it was all 100% new to me.

Rather enjoyed it; the Cult gets effectively unlimited reinforcements (on the two missions we played) at least so that made sense of the Marines getting two combat phases. In the first game 4 Marines had to kill 25 Cult models and the Cult had to kill just 2 Deathwatch. This was a surprisingly close game as my mate playing the Marines had lost a model and just about swung it to kill his 25th 'Stealer as he was getting mobbed.

The second game we didn't finish but overall I was very impressed (and surprised) at the quality that had gone into every aspect of this release and TBH I think that the new CEO is more interested than Mr Tom "GW is my personal retirement fund, lawl" Kirby in putting the "Games" back into Games Workshop. On first impressions this is a very solid release from a company which didn't consider itself a games company...

Again thanks Mauler for more details via email.
I figured that you and others would find this interesting; I was in a local GW run by a chum and he had a preview copy of Deathwatch: Overkill out for people to try out.  It plays a bit like Space Hulk crossed with Prodos’ AvsP in that movement is done by tiles & Cult units enter the board from ambush points around the edges but combat is measured out using a clear plastic Assault/Combat/Maximum range measurer.

It seemed a bit unfair that the Marines were the usual Snowflakes and got to attack twice but considering that their missions consist of “kill X ‘Stealers” or “get X Marines to tile Y” to win, the Cult numbers are infinite, often only have to kill a small number of Marines to win and can easily get a lot of models into the Marines’ faces quickly it all kinda evens out.  The first mission I watch play out involved FOUR Marines having to kill 25 Cult models while the Cult player had to kill just two Marines (now you see why they get two combat phases).  The Marine player won it using the Salamander (Terminator), Imperial Fist (frag cannon) and two others but I think he lost a model so it was quite close.

The second mission I took control of the Marines but ran out of time to finish; I had 6 models to get to 4 points on a specific tile so all the Cult player had to do was kill 3 models to mess up my victory.  I was very quickly pincered and mobbed, losing two models but made fair progress towards my target point.  We called it a draw.  I think there’s 9 missions overall so there’s a good chunk of replayability there.

Keep up the good work, mate :]