More Intel on the Fyreslayers 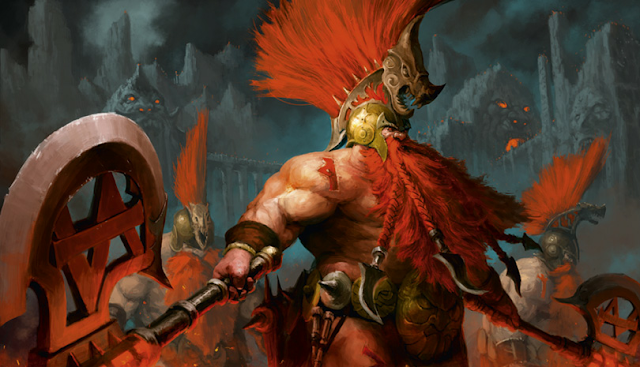 More intel is coming on the Fyreslayers, a continuation from yesterdays information. This looks like it is going to be a big release!!! Very cool.


You can see yesterday's post at this link. http://natfka.blogspot.com/2016/01/fyreslayers-release-kits-hearthguard.html

A few more nuggets of info from the WD:
- Fyreslayers are born from the fight between Grimnir and Vulcatrix.
- Fyreslayers believe that in Ur-Gold resides the essence of Grimnir, their shattered God.
- Ur-Gold is magical. There is a funny rule when you play a Runemaster where your opponent chooses one of his units as carrying some gold, and thanks to it said unit can reroll all 1 to wound. But better not let the Runemaster get close enough and realize you are carrying the gold or the Fyreslayers will go all chop chop on you.
- When they insert Ur-Gold runes in their flesh, their God's energy starts flowing through their vein. This lead to things like being surrounded by flames, striking harder, more resilient skin (I suppose that's why they have 5+ save).

PS- They're not actually called Chapters as you already guessed, but I don't know how to translate the real name in English.

Sorry but there are quite frankly too many things in the WD for me to read everything.


The huge salamander looking monster are 100% new models and are featured heavily in the next WD. They're not simple cavalry, they're large monsters in the same category as a Carnosaur.

Thought they are not actually slayers at all, they have their traditional look. Normal flesh, orange hair (but they show other models with dark hairs). Flames only appear on a few specific items. One recurring item they carry is the key. In fact one of the weapons carried by a lizard rider looks like what would happen if you were to turn a Keyblade into a halberd.

PS-
Thought I constantly called them salamanders, I have actually no idea what the big monsters will be called. If it's in the WD I've yet to read it.

They all are helmeted. Usually the part at the top of the helmet where the hairs "burst out" is shaped like a dragon head. Between the helmet and how much they are naked they kind of give a small "300" vibe.
1/03/2016
Natfka
Age of Sigmar, Dwarves, Gaming News, News Headlines, Rumors