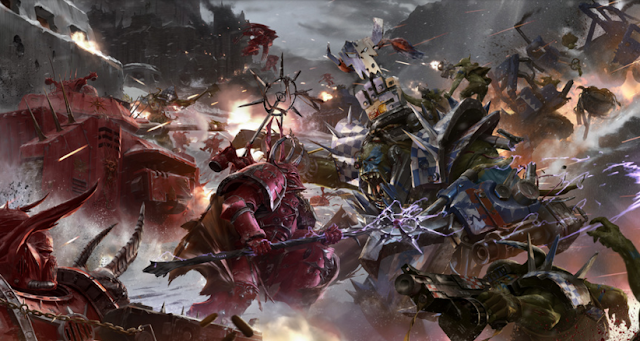 Team Critical Hit has released a FAQ for Eternal Crusade, to answer the questions mostly coming in from around the internet. They handle the questions here very well, including big ones like, are you already funded?, reviews from other people, etc.


It's also listed at the following link on their website
http://forum.eternalcrusade.com/threads/steam-early-access-faq-and-q-a-with-nathan-the-destroyer-of-worlds-and-crusher-of-dreams.50649/#post-976731

THE FAQ
Having been reading the internets over the last days after we confirmed the closure of the Founder's program, we of course anticipated mixed emotions about this. Not only are the differing opinions on Early Access in general, Kickstarter, Founders and other such programs which exposes people to the game.

Now, companies have had very different reasons for doing this so I figured I'd gather a Q&A or FAQ, on why we are doing things and what drives our decisions. I'm hoping this helps everyone understand better our intentions, rather than assume we the intentions of other games and what they have done in the past, since we are not them, we are Nathan. I mean Alpharius. Like Alpha.

Do you need more cashmoneys to launch the game this year?
Nope. We're funded.

You're not doing this as a cashgrab?
No, our philosophy of being agile, is that we strongly believe that the inclusion of more people, as early in the development process as possible will ultimately make a better game. We are simply continuing this program (previously called Founders) in the Steam Early Access framework.

Why do you ask for more cashmoneys and continue the Founders program as Early Access then?
Because we can always use more cashmoneys to make more war. Like developing the first free expansion earlier, more weapons, get Orks and Eldar faster out of outsourcing and into the game.

But you don't need Steam Early Access for that, it's already working and on Steam?
No, as we don't have a Steam Store page and a full part of either a Launch path or an Early Access path, we lose out on a lot of things. Our own infrastructure simply can't handle the success we're having, ranging from crap payment options on our website to simply delivering news through Steam to our customers. They provide us with great tools out of the box which plugs right into Unreal Engine 4 as well.

And me being the crusher of dreams decided we weren't quite ready to launch yet, so my options were a tad limited.

But you're totally going to be one of those games that never leave Early Access!
No, this is not possible. We are launching this year and while I wish it was possible, I can not shove a Steam EA PC game on a DVD, put it in a box and put a Playstation 4 sticker on it and hope it works. So calculate from that what you want but I believe 2016 will not last forever.

So what's really changing for us moving into early access, from the perspective of the customer?
More blood for the blood god. More gold for the war effort. More people to be part of the development effort. We'll suddenly have a proper store page on Steam which we couldn't before, all achievements/cards/badges/crosspromotions are fully active, people can see you playing it ... I could go on and on, but most importantly, when we launch, we'll have a tried, tested and well developed game that scales and has withstood the pressure of you. And judging by some of the love fervor on the forums lately, that is a lot of pressure.

What about all the reviews and all the bad people on Steam?
The only thing that will kill us in the next 10 years is if we make a shit game. Nothing else. And we have lots of indicators that people don't think we're shit. Surveys are awesome, sales are cray cray, and we don't spend a dime on advertising so this is all word of mouth. And if our pursuit in involving people in making the Eternal Crusade a better game as early as possible costs us bad reviews and nobody gives us good reviews, well. At least we died for what we believe in.

Besides, it's a bit insulting that Steam are bad people. I have 248 games on Steam. That must mean that I am so bad I'm worse than the filthiest comments on dubstep videos on youtube.

But you aren't ready yet for Steam Early Access!!
There is no definition for when you are ready for it, that is the root of the problem. Some people put shit there, some don't. And if we're constantly going to be asking ourselves, are we ready for X, Y and Z - we'll suddenly be at launch time and missed the massive opportunity we believe in - involving you as players early. I don't think you want that.

But you can't launch without Keybinding on EA!!?
That and many a system mentioned are exactly why there are less frequent updates. We have very large systems coming in, in addition to keybinding coming in. It's just not as simple as it seems for how we're doing it in UE4.

So what you are saying is basically, you'll have a store page, bad people on the internet might review you badly and thats it?
Yes. Besides of course Founders package, with it's benefits are no more. And if you are hesitant, just wait, I'd rather have you happy than disappointed.

But how will you explain the full width and breadth of the game so people don't think it's just a lobby shooter?
I have a big nice inforgraphic coming showing that but the dude is sick. Then there are some nice people that twitch us, do interviews with us but ultimately we will constantly expand the game with new systems. Even actions speak louder than dubstep. (Sorry Benga and Skream)

What about [insert my thing], is it in Early Access launch?*
There is no such thing as launch, it's merely moving us to better infrastructure, which admittedly is debated and stigmatized. We will strive to update weekly and bi-weekly with new stuff. Maps, fortressess, character progression, visual customization, lewt and personalized loadouts, the meta-map, warlords, sub-factions, the relic items from stores and new items as well as of course Orks and Eldar. We're an massively online game. We never stop developing or adding to the game. As such, I guess we're never finished :p