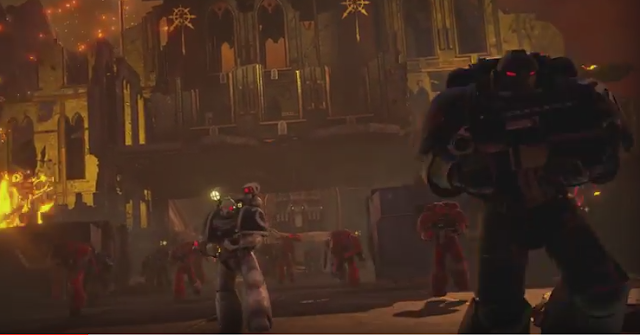 Bandai Namco Entertainment is the publisher for the game, as was announced earlier today. Also in the announcement is that the Eternal Crusade will available later in the year for PlayStation® 4, Xbox One system, and Steam for PC.


Great news, and a very cool trailer gives us a glimpse at more than just the Alpha testing that we have been playing. Here is the new in-game trailer


Massively Multiplayer Shooter, Warhammer 40,000: Eternal Crusade, Coming to PlayStation 4, Xbox One and Steam for PC in the Americas


In Warhammer 40,000: Eternal Crusade, four factions -- Space Marines, Chaos Space Marines, Eldar, and Orks -- plan their strategy and deploy their squads as they assault strongholds, defend outposts and delve into the Underworld to combat hordes of Tyranids. Players must work in harmony both on and off the battlefield in order to advance their faction’s goals and establish supremacy over the enemy.


“It’s an honor to work on a Warhammer 40,000 game that’s already getting great community feedback on our pre-alpha. We can’t wait to share what we’ve built with a wider audience.” – Stephen Mulrooney, SVP Behaviour Digital


“We are really happy to have BANDAI NAMCO on board as a partner to complement our collaboration with Games Workshop.” – Rémi Racine, founder and CEO, Behaviour