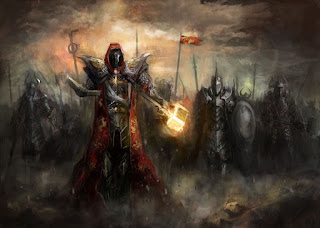 I wanted to come back to the Genesys Project as it is making good progress again now that the holidays are over. Fun things like repeating crossbows, exotic metal alloyed weapons, are currently being tested. However, tonight's subject, magic. Magic in The Genesys Project is energy that is siphoned off from the Aether, or channeled by those that know how to do so.

The Fey. While we have not been talking about this race much, they are very much apart of the Aether and the spiritual world. They can manipulate it and adjust their "powers" at will. In game this means a flexible system in which they can change their power level and other power attributes at will.

Now back to Humanoids, who's access to channeling the Aether is by creating set powers. In essence you create your own set spells which of course changes the difficulty of it working. These powers are set for your race, whether they are ancient manuscripts or endless sages working on the next great power for your army, is up to you.

There are two types of Powers for Humanoids, The Priests of the Sacred Faiths, and the Channelers of the Aether Scrolls

The Sacred Faiths Priests that use the faith of others to channel the energy from the Aether, using themselves as a focal point to control the energy and do with it as they see fit.

The Sacred Faiths use powers that enhance or destroy those around them. They can enhance, characteristics, heal, destroy, and even animate. Their powers are internal and focused through devote worship.

The Aether Scrolls contain secret rites and powers, where individuals seek to tap into the energy of the aether on their own, to wield powers beyond mortal men. These powers come at a price though, with no one else to help channel the energy as happens in faith powers, a Channeler relies upon his own strength to harness the powers.

Channelers manipulate the environment around them, their powers are external. They seek to control the Extremes, and use them to tear apart their enemies, or shield themselves from harm. The extremes are the violent forces of the universe, things like Fire, Ice, Radiation, Acid, and Air. These are hostile to life, and the very things that the Channelers are controlling.

An example is Illumination- This is a radiation extreme that the channeler uses causing area around his body to burn bright with light. Everyone near him in a small radius suffers from intense radiation.

The powers radius, strength, and duration can be altered when you create your race and unit classes. So if you have very powerful Channelers in your race, obviously you would create some more intensive and powerful versions of the powers.

It's late now (and I will pass out here soon), but tomorrow I will show an example or two of how you can create your own powers.