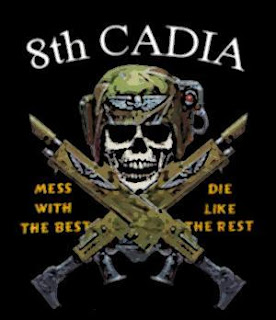 Hey there neighbors, we're back at it with our Cadian Battle Group review, this time with the Emperor's Blade Assault Company! Check the Tactics Corner for more great reviews.


The Assault Company is tasked with clearing enemy units from key objectives and then seizing them. Comprised of hardened veterans mounted in armored transports backed by vicious Hellhound tanks, this formation means business.

Here's a formation with some of my favorite models: Astra Militarum Veterans and Hellhounds! I am a big fan of both, and have loads of them in my Astra Militarum army. While Veterans have always been good, Hellhounds have risen and fallen in relevance in the game. Does this formation help?

This formation is comprised of: 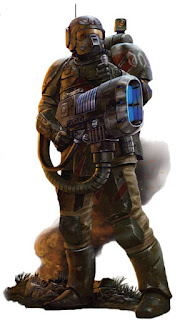 So, this is a pretty bad ass formation, in my opinion. Why? It gives you a lot of very cool units, all of whom are good, AND it gives you ObSec. Oh, and for kicks? Preferred Enemy vs. enemy units within a large radius of an Objective. That is solid.

ObSec is a critically important special rule for winning missions as we all know, and cannot be understated.  Having 4 units with it stock in this formation is excellent.

Veterans are a truly solid unit in 40k and always have been. Cheap, BS4, and loads of powerful options makes them a fantastic unit. My preferred load out these days is to run the unit with Shotguns, 2 Melta Guns and a Heavy Flamer in a Taroux. As the Taurox has 2 fire points, this works out quite well. The mix of Heavy Flamer and Melta means you're a threat to any target, and Shotguns allows you to also assault after shooting if needs be. The Taurox adds some light long range fire support and moves through terrain fairly reliably. In all, it's a great, well rounded unit. Add in Preferred Enemy and you have a real winner.

Alternatively, you could snag Plasma Guns where Preferred Enemy (assuming your target is near an objective which they often are) really helps to mitigate overheating. Flamers too, become deadly with the bonus and even Grenade Launchers that are that accurate are worth considering for a cheap option. 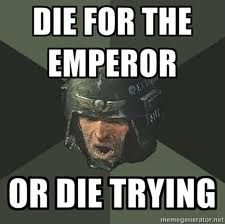 A cheap melee weapon such as a Power Weapon is worth considering if you have the points, as again, with preferred enemy a Power Axe on a Vet Sarge with 4 attacks on the charge will do some work. Just be wary of challenges where the poor guy may get smoked before swinging.

I would typically pass on the Heavy Weapon as this formation is built for mobility, but you could load out one of the Veteran units as a long range shooting unit and leave them on a home field objective. A Las Cannon and 3 Plasma Guns is great for this, or an Auto Cannon and 3 Grenade Launchers to save points.

I often give my Veterans the Forward Sentries upgrade as for a mere 10pts, they gain some great benefits. The bonus to cover saves and forcing enemies to make disordered charges can mean the difference between holding an objective and not.

Carapace armor is rarely worth the investment though. There is just too much AP4 in the game to justify the expense (although 15pts is quite reasonable) and typically you can get a cover save fairly easily.

Lastly, Demolitions is fairly expensive but SO good! Having a Melta Bomb on every model in the current meta is fantastic. Imperial Knights, Wraithknights, MCs, etc. will fear these Guardsmen! They really become a big threat to some high value targets. The demolition charge is just icing on the cake, and a seriously fun weapon to use...just be wary of hitting your own unit with it! 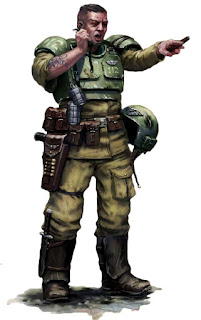 The Company Command Squad is another awesome unit. With the same strengths as Veterans (BS4, lots of powerful weapon options, etc) plus the all important orders. As this is a mechanized formation, you will typically be using your orders on yourself, but, with a unit that packs 4 Special Weapons, that is not bad. If you position one of the Veterans to be near the CCS then you can take advantage of both orders but I find that often doesn't work out.

That said, Ignores Cover, Monster/Tank Hunter, Split Fire, etc. really make this a potent unit. Any target that relies on cover saves will fear your CCS, as will any heavy armor target. As with Veterans, you'll typically want to load up on 4 of the same special weapon. My favorite is 4 Melta Guns. And, as your CCS wants to issue those orders, a Chimera is the hot choice here as you can do so from within it. If taken as a part of the Cadian Battle Group detachment (which may be a bit hard to do due to running out of points) getting to roll 3, drop the highest for orders checks will help a ton to make them reliable.

Alternatively 4 Plasma Guns works well, too, or a combination of Flamers and Heavy Flamer. But for my money the CCS should pack those Melta Guns. When you have an enemy Knight bearing down on you, 4 Tank Hunting Melta Guns will give it pause!

Kurov's Aquila is an expensive choice, but if you're running a lot of Plasma, may be a worthwhile consideration. And, as these units are all mobile, they can take advantage of the buff quite easily.

Lastly, I often toss a Power Fist on my Company Commander mostly because it just looks cool, but, surprisingly it comes into play all the time to hilarious effect. As he comes stock with 3 wounds and attacks and a 5++, you'd be shocked how often he gets to knock people's lights out with the fist! Challenge from anyone not sporting strength 6+? Sure, let's dance! What started out largely as a joke for me ended up becoming commonplace in my lists as the CCS would end up very close to the enemy to use the Melta Guns and then find themselves in melee where the Commander would amuse me to no end, kicking ass against all odds! 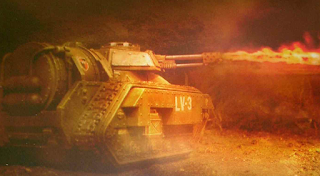 As for the Hellhounds, there are a number of ways to consider running them. Hellhounds are a mid tier unit on their own, for me. I want to love them, I have 3 of them, but they often struggle a bit when compared to other options available. That said, they can be quite good and with Preferred Enemy vs. a squishy target on an objective, they're pure murder. Xenos absolutely fear them, as does anything with a 4+ or worse save. I have had good luck running them with the Heavy Bolter, but the Multi Melta is also a solid choice as it gives them a tool to use when the Inferno Cannon isn't ultra useful.

The Banewolf is another tank that wants to rock, but can really struggle. Due to its deadly Chem Cannon, it tends to be a high priority and is often destroyed before getting to shoot. However, when it does, it is pretty brutal especially when benefitting from Preferred Enemy. I typically run mine with the Heavy Flamer, but again, a Multi Melta is not a bad choice.

The Devil Dog is a tank you rarely see but with Battle Company and Imperial Knights to popular, is worth considering. A fast vehicle with two potent anti tank weapons is not bad at all.

I personally would run this formation with the CCS in a Chimera, the Veterans in Taurox and a Hellhound to back them up. Meltas and Heavy Flamers all over the place and possibly some Demolitions upgrades, too. Run relatively cheaply, you're only looking at a 710pt investment for a ton of hard hitting firepower, mobility and 4 ObSec units. That is not bad at all and gives a sort of Astra Militarum army in a box, so to speak. Pair that up with a few of the other Formations available to them, allies, or what have you, and you've got a great addition to many armies.

What do you think about the Emperor's Blade Assault Company! And remember, this is the last day to take advantage of the buy 2 get 1 FREEITC Cargo Container special offer!