Up and Coming to the Age of Sigmar- Rumored Releases 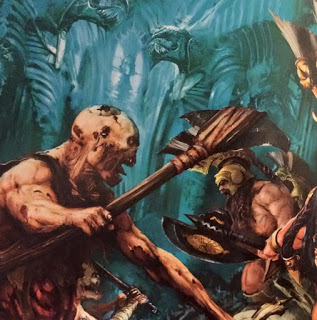 These rumors are given credence from the hidden Undead Construct that we have seen in recent artwork, and from Squiggly's confirmations. So there appears to be some backbone to at least this part of the rumor.


Please remember that the following are rumors posted up first on Bell of Lost Souls.

via Larry Vela on Bols
The following factions are all reported to be coming in Q1-2, arriving before summer. Note that these are not said to be coming one after another and 40K/30K are going to be interspersed in here.

Each faction will feature a large “centerpiece kit”
Undead (said to be the next Age of Sigmar Faction after Fyreslayers)
There will some type of large undead giant coming with them.
Oruks
Look for the new range to emphasize the “savage” aspect of the greenskins.
Duardin
These are said to have a very different aesthetic from the Fyreslayers.
Their centerpiece model is described as a large humanoid construct.


Additional Information that seems to be along the same lines as the "Centerpiece rumor above"
you can see the two images and the discussion for the Undead Construct here. The images found by an astute reader on Faeit 212
http://natfka.blogspot.com/2016/01/tomb-kings-spotted.html


Squiggly also said this regarding a new Undead model, and a new Wyvern. Although I beleive he said the Wyvern is not coming right away.

http://natfka.blogspot.com/2016/01/a-look-ahead-space-wolves-dwarves-and.html
Natfka, in relation to that new AoS artwork you posted about. (Undead constructs post). GW have had a policy, since the Harlequin release I think it was, that no artwork will be published that doesn't represent a model that has been, or soon will be released. That's all I'm saying on the matter. (Those new wyvern things look pretty cool to though huh?)


In regards to the Wyvern
Still a fair way off though
1/21/2016
Natfka
Age of Sigmar, Games Workshop, News Headlines, Rumors