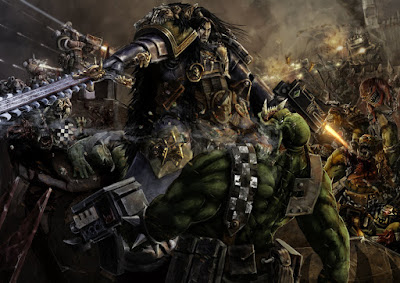 Space Wolves are about to hit next weekend with pre-orders and Curse of the Wulfen. It sounds like it is going to be a blast, as we return to Warhammer 40k.


These are all translations, so there is some give and take on them.

Atia was saying this......
http://war-of-sigmar.herokuapp.com/bloggings/428
Pretty cool, the last pic describes how Space Wolves, Dark Angels and Grey Knights all wants to "meet" the Wulfen, and there is a battle between Dark Angels and SW vs Khorne and Slaanesh, and the Ravenwing bikers tells Sven to retreat, the Wolf Lords answers "Try to disperse me XD!!"


Since I can't speak German, here is what some readers have put together for us here. These were sent in this morning and reveal some backstory for the new releases and Curse of the Wulfen.

Helfrost pistols are now a thint at S8 AP 1 helfrost.

The wulfen grenade launcher goes on the backpack so might be worth
taking. 12" S4 AP 5 storm D3, in CC it acts as frag grenades (ignore
initiative penalty for charging through difficult terrain)

The curse of the wulfen is split in two tables, hunt ans kill.

4-5 Bestial Speed: in the movement phase, add 3 to all the run and
charge rolls for all models in the affected unit

6 Reckless Wildness: models in affected units have the furious charge
special rule and get D3 bonus attacks instead of 1 (unless they have
the berserker special rule)

1-3 Supernatural Quickness: Add 1 to the initiative of all affected units

4-5 Brutal Savagery: models in the affected units get re-roll to wound
in close combat

6 Unstoppable anger: models in the affected units that are killed in
close combat can move up and attack at the end of the initiative step
before being removed as casualties. Affected models do this even if
they have already attacked this phase

Second Set
"The Saga Edition of Curse of the Wulfen is supplied in a sturdy box that looks as if it were carved out of the stone of the [Great Annulus] in the heart of the Fang. Embossed on it is a sign of Wulfen in "gold look". The box alone looks fantastic engraving, but on opening it is really interesting. In it you'll find the Narrative book Curse of the Wulfen, but with an elaborate exterior of (and a practical bookmark).”

"Among them are three smaller booklets that contain the same game content as the Standard Edition (separated into three volumes) "Sons of Russ" contains the new Space Wolves rules of the Standard Edition, "Scions of the Warp", the new rules for Chaos Daemons, and "Echoes of War" the six "Shadows of War" missions and instructions. There are also 12 special dice (six gray, six red) with symbols to the special rules of Hunting and Death of Wulfen [Cannot translate a word here], and six numbered markers, which are ideal as a mission objective markers. In addition, a double-sided poster and a rule-reference card to Curse of the Wulfen are included."


I can’t make out everything in the Two-Handed Frostaxe entry, but I THINK it says something to the effect of:

Bear in mind there are several words in this entry that I could not translate, so this could well be incorrect. I base this inference on the fact that the weapon entry does not have Unwieldy, making it seem like Merciless Momentum replaces it.


The Helfrost Pistol and Stormsplitter grenade launcher entries are too blurry for me to attempt translation.


That’s about all I can get from the images I’ve found.


If these translations hold true, I’m excited for these units! I agree that we are almost definitely seeing at least a small timeline bump, as the Wulfen are the 13th Company returned from the Warp/Eye of Terror.

This fine art print shows the artwork from the cover of Codex: Space Wolves (and the novel "Legends of the Dark Millennium: Space Wolves") and is a special collector's piece, which is limited to 75 pieces worldwide.

The picture itself is a great artwork by Codex Cover Heavyweight Ray Swanland which measure 297 mm x 420 mm in size and is printed on linen paper (260 g / m²) (and it has a frame made of cardboard) - Perfect for about your game table or hang on the walls of a [backdrop?]. Since there are only 75 of them, and Space Marine Collectors are a wild bunch, you should quickly drop by to blacklibrary.com before they're gone.

A conspiracy takes the Space Wolves. Time for their greatest heroes to rise.

In "Legends of the Dark Millennium: Space Wolves", eight of the most famous Black Library authors tell eight thrilling stories of the 30th Great Hunt. Logan Grimnar is missing in action and the Lords of the Order must save him.

In this novel we see the Space Wolves at its wildest side, when they discover a vast intrigue in "Feast of Lies”, the beast within in "The Caged Wolf", and fight and perform a daring mission in "The Dark City". All this culminates in a story of heroism and loyalty, in the Space Wolves fighting for the honor of their order and their noble leader.


The rules Space Wolves Wulfen
The Wulfen are an avalanche of teeth and claws, attack under bestial howl that goes to the core. They are dangerous, but the greatest effect they have on their battle-brothers. We present the rules that you can use them.

Curse of the Wulfen
In addition to the rules for the new Wulfen and Equipments, War Zone Fenris: Curse of the Wulfen contains some "shadow of war" missions, a lot of rules for Chaos Daemons, and new formations. These formations give your Space Wolves collection more options. The Wulfen Murder Pack makes these ferocious warriors faster and more dangerous.

The Wulfen are natural force on the battlefield and strike as movable stormtroopers to so fast and furious that few can withstand their attack. When they emerge in War Zone Fenris: Curse of the Wulfen, Logan Grimnar sends his Wolf Lords in order to recover them back; they are rapidly equipped with weapons from the arsenal of the Fang and fight alongside the Great Companies against the enemies of the Order.

You can add Wulfen as elite units at any Space Wolves army, where they act as a scathing attack troops. Wulfen are nearly unstoppable in close combat, and their weapons allow them to fulfill any task, from the fight against orcs or lower daemons to battles against the greatest monsters and war machines.

Their greatest effect is the curse of the Wulfen. Their presence brings the Beast in Space Wolves close to light and makes them wild. While it can be problematic, if your stoic warriors enter the fray a Space Wolf is never more dangerous than in the clutches of the curse. [Take note]!

With a howl that makes the blood run cold to ice, the Wulfen jump at their prey. They expose their fangs, and their claws are obvious. In their haste to quench their insatiable hunger for bloodshed, they run with frightening speed. Their anatomy was so changed by the strange curse that weighs on their bodies and souls, that they are perfectly well adapted to the requirements of the fight at the end of the hunt. The Iron Priests equip the Wulfen for the fight, and accordingly they carry powerful artifacts. Explosives from their storm-splitter salvo grenade launchers explode in the midst of enemies and sow panic and confusion, while the bestial creatures strike with crackling claws, axes, and hammers. Their return is anything but uncontroversial in the Order, because it seems The Wulfen are always on the edge of the Berserker. Worse, who hears the bloodlust in their war screams senses the beast awakening within himself.

Curse Of The Wulfen
The unbridled ferocity of the Wulfen is dangerous and contagious and has a profound effect on the psyche of all other Space Wolves with whom they fight. This section contains a number of new rules that constitute the fear and ferocity these bestial creatures cause in the nearby Space Wolves units of your army.

All Space Wolves bear in the unique genetic legacy of their Primarch in the form of the Canis Helix. Although it is necessary for their transformation into sky warriors and origin of their great strength, it can take possession of their senses and make proud warriors into lowly beasts when they are exposed in battle to the primal savagery of Wulfen. Especially the young warriors of the Order are receptive to the call of the Wulfen, because aggression is burning in their blood like fire. More experienced warriors have learned to control their anger in battle, but every Space Wolf must be careful not to give in to the frenzied bloodlust in himself.

[Although a temporary loss of control in a Berserker Space Wolves Pack can turn a defeat into a victory in battle], must the son of Russ himself endeavor to dominate the beast inside him, lest one day the curse of Wulfen befall the entire Order and all the Space Wolves become condemned to an existence as beasts.

NOTE: On Hunting result of 1, the unit gains Strikedown OR Hammer of Wrath (Translation leans more towards Strikedown, but it could go either way) and re-rolls attack rolls.

Frost Pistol is S8 AP1 12” Pistol Helfrost
Still no clue as to where this piece of wargear is going. The Wulfen cannot take it - so who gets it? I’m hoping for an Ulrik the Slayer re-cast, as the model is currently listed as not available on GW’s website. The Italians seem to suspect this as well.

The Week In
Closing join us for a look back at the week, with comments or tips on new releases and tidbits from the White Dwarf bunker. This week we look at the duties of the Wolf Lords and the interior of a mastodon. Yes, really.

Wolf Lords: Burden of duty
Glorious Hero saga
War Zone Fenris: Curse of the Wulfen is in the heart of a legend about the Space Wolves ind their desperate mission to save the back-recurring Wulfen and conceal. The events attract great suspicion, not least at the Grey Knights and the Dark Angels. The Order finds himself suddenly in a race to the back-returning 13 Great Company in reception to take before someone else does.

This race against time we experience through the eyes of the Wolf Lords of the Space Wolves, such people as Egil Iron Wolf, Sven Bloodhowl, and Harald Wolf Death. Each of these mighty hero breaks with his family and found it quickly in battle with demons again. Sven Bloodhowl (shown at left) [finds?] something sealed with the warriors the Dark Angels, while they jointly fight demons of Khorne us of Slaanesh amid the fog of Tranquilitus. It comes to a favorite moment of the White Dwarf team, as Ravenwing bikers prompt the stubborn Wolf Lord to retreat his troops from the war zone and he only laughs in their face and replies: "You just try to sell me!”