The Wulfen: Additional Translations from German 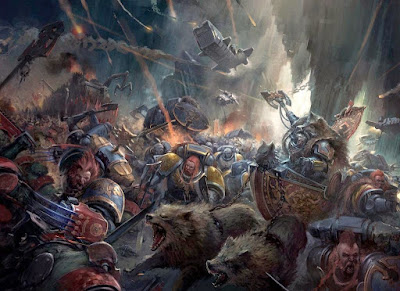 Yesterday we had the rules for the Wulfen revealed in German with translations into English. However, what we had translated was not the whole story, as there was some background as well.

Additional Translations from the German White Dwarf Leaks.
Huge thanks for sending these in. I think these bring up lots of questions...possible timeline bump?

“For thousands of years the 13th company of Space Wolves was lost in the Warp, disappeared as they watched Magnus the Red in his escape from Prospero. Now they are back and bring a curse with them. A bloody war threatens Fenris.”

"While approaching the end times, the Wulfen break throughout the galaxy from the Warp to fight on the side of their brothers. Their savage fury infected their battle-brothers.”

“This week come the Wulfen howling from the Warp and we have everything you need: on page 16 you'll find splashes of color, on page 24 fully [standalone?] rules - and not just for the Wulfen itself, but also for …" (the rest goes off the page)