Final Voting for the 2015 Gaming Awards 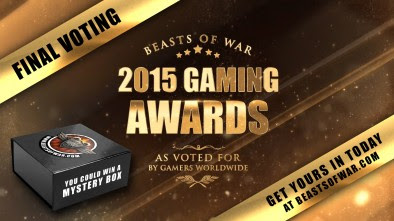 The final voting on the 2015 Gaming Awards is going on now over on Beasts of War. Warren runs this every year, and there are some interesting choices up for 2015. So head over, and see what your fellow gamers and claiming are the best for 2015.


Best of all, vote, leave your email, and you could win a Mystery Box from Beasts of War. It only takes a couple minutes to do this ( I've done mine)

via Beasts of War
http://www.beastsofwar.com/awards-2015/final-voting/
Here’s A Reminder Of The Categories