There is an update coming for the Warhammer 40k Assault Dice app. The update includes increased device compatibility and the options to throw even more dice. So get rid of the wild dice throwing, and just use an app, you opponent will thank you.

The previous article for this and video can be found at this link.http://natfka.blogspot.com/2015/09/warhammer-40k-assault-dice.html

via Tobias Drewry "Warhammer 40k Assault Dice" as was posted in the comments section of Faeit 212
To those still following this -- Our update is slightly behind as we didn't just want to increase the number of dice available, we also wanted to expand the device compatibility.

As of this writing we're able to throw dice on devices back to the iPhone 4. What we have hit is a limit to the older devices capability to handle physics modeling on their older CPU/GPUs. The result is an imposed limit based on device type. There is now a new setting on the application settings page which lets you remove this cap -- at your own risk.

The reason we put this setting in is so folks can play with the app how they want to. Additionally, different people have different levels of tolerance for frame rate drops. We will continue to refine and update the app, expanding the quality on the lower end devices while also improving the look and feel at the higher end of the spectrum.

Apple doesn't give us the ability to *not* sell the app to lower end hardware -- the App Store doesn't differentiate by phone model or tablet model. The result is anyone can buy the app and end up unhappy because the performance wasn't there or the app failed to run. We attempted to use PSA text at the top of our app listing to prevent older device owners from buying the app. This, unfortunately, failed.

In addition to the raised die count cap (140 on most newer devices), we've also vastly improved roll and settling speeds. We've added a die pop event which occurs if a die gets "stuck" in a settling state but can't quite reach the ground. This gently pops the die up, spins it, and then lets gravity do the rest.

We've also added a massive list of selection options. As well as a Rate of Fire toggle for throwing 1, 5, or 10 dice per tap (up to the cap).

If your reading this -- Thanks for sticking around! 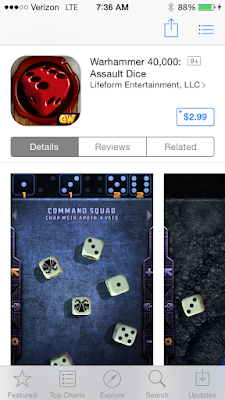